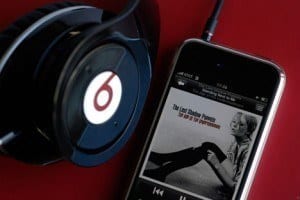 It looks like Apple is trying desperately to keep up with trends with their recent offer to buy extremely popular headphones company Beats Electronics, better known as ‘Beats By Dre’. The deal is rumored to be set at a buyout of $3.2 billion, which would be a good investment considering the $1.5 billion revenue the headphones reportedly bring in each year.

Rumors of the buyout began to kick up dust when a video surfaced of Beats co-founder Dr. Dre and R&B artist Tyrese Gibson where Tyrese calls him “The first billionaire of hip hop.” The video was posted on Gibson’s Facebook with the words “Dr Dre ON THE night his deal went public that he did with Apple 3.2 BILLION!!!”

If this buyout was to happen, it would be Apple’s largest buyout yet, with their last largest acquisition being their $404 million purchase of NeXT software back in 1996. While most are saying this is a good look for co-founders Dr. Dre and Jimmy Lovine, is this a good look for Apple? Most are saying no. Media sources like Forbes and Huffington Post are touching on the fact that the outlandishly large sum of money Apple might be planning on dishing out to have ownership of Beats Electronics, is not worth the product.

Many techies can attest to the fact that ‘Beats by Dre’ headphones rank below average against some of the other higher quality headphone brands that are in the same price bracket. Companies like V-MODA and Shure, are cranking out quality products that don’t compromise the sound for a sleek look. An article in TIME ranked 18 headphones from worst to best and they ranked Beats as being 17 in the list. Having reviewed a few headphones myself, I can say that ‘Beats by Dre’ are one of the worst headphones I have ever used. So why would Apple want to invest in such a subpar product instead of just coming up with a better one? It seems like the reason may stem from the fact that in this day and age trends trump innovation.

Do you think this was a good move for Apple?

[easy-social-share buttons="facebook,twitter,google,linkedin,stumbleupon,pinterest" counters=0 hide_names="force" fixedwidth="yes" fixedwidth_px="111"]
Previous Article'Community' has been cancelled, but that might be what the show needed to become biggerNext ArticleSolange Knowles does a live action Mortal Kombat move on Jay Z in an elevator