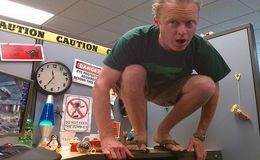 “Owling” and other Web memes are gaining popularity

When owling first debuted on the Web-sharing site Reddit, it came with the tagline: “Owling: Because Planking Is So Two Months Ago.” Planking may have to take a step aside as owling and other up-and-coming Web memes are starting to catch on.

Planking, as defined by KnowYourMeme, “refers to the act of lying face down with arms to the sides in unusual public spaces and photographing it to share online.” The trend, also known as the Laying Down Game, caught on quickly, picking up celebrity followers ranging from Justin Bieber and Katy Perry to basketball star Dwight Howard, CNN reports.

The horizontal position is getting some competition however, as owling starts to pick up a following. To create this image, one perches while gazing off into the distance, essentially impersonating an owl. Hilary Duff is the world’s most famous owler to date.

Ben Huh, who created the Cheezburger Network that specializes in Internet memes, describes the inter-meme relationship. “Planking is kind of like the Rebecca Black of Internet memes. So many people think it’s so stupid — but they’re watching it and they’re parodying it.”

“Owling is what we call a ‘forced meme,’ ” Huh continues. “It’s the idea that we’re going to try to make something happen in reaction to something else.”

Planking has led to quite the odd assortment of spinoffs. CNN takes a look at a few variations.

Toothpicking: The vertical response to the horizontal planking, one poses upside down on one’s head.

Coning: Ordering an ice cream cone at a fast-food drive-through and picking it up by the ice cream, not the cone.

Leisure diving: Posing as casually as possible for a mid-air photo of a dive into a pool.