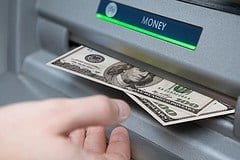 One 12-year-old girl in Michigan has taken shown-and-tell to the next level.

Police were called to a middle school Monday when a 6th grade girl brought $20,000 in cash to school—and began giving it away to other students.

The female student stuffed her backpack to the brim with $20,000 in cash and brought it to the 6th Grade Academy School in Taylor, Michigan. Everything was going smoothly until the girl started handing the money out to her friends. She reportedly gave $500 to one student and $200 to another.

“Had word gotten out to maybe someone other than some other 12-year-olds, that could put her in a dangerous position,” said Chief Mary Sclabassi, Taylor Police Department. “The girl started distributing the cash to some fellow students. As high as $500 to some students.”

The school principle eventually found out, and he immediately contacted police, according to local ABC affiliate WXYZ.

“There was no threat to the student body in the building and the matter is currently in the hands of the Taylor Police Department,” Teresa Winnie said, the assistant superintendent for the Taylor School District.

She added that officials “do not have a specific protocol for this type of situation.”

The girl reportedly obtained the $20,000 from a child who lives in a neighboring house across the street. The source of the money is unknown, and police are now holding the money. Police said that if the owners can give a reasonable explanation for the money they can have it back.