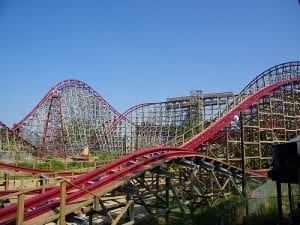 Woman falls to her death at Six Flags, seven injured at Cedar Point

On Friday evening around 6:30PM at Six Flags Over Texas in Arlington, a woman tragically fell to her death while riding one of the theme park’s roller coasters. Yesterday, investigators were still trying to conclude how the roller coaster accident occurred the night before.

Six Flags’ Texas Giant is the tallest steel-hybrid coaster in the world, and the site of the unfortunate accident. The Star-Telegram in Fort Worth recounted a witnesses’ description following the disastrous ride. John Putnam was waiting in line for the next car to arrive when the daughter of the victim got out of the car and was frantically screaming about her mother’s fall.

Another witness of the Six Flags accident, Carmen Brown of Arlington told The Dallas Morning News that the victim involved in the accident seemed concerned about being properly secured in her seat, and informed a Six Flags employee.

“He was basically nonchalant,” Brown told The Dallas Morning News. “He was, like, ‘As long as you heard it click, you’re fine.’ Hers was the only one that went down once, and she didn’t feel safe. But they let her still get on the ride.”

Here is an excerpt from Six Flags’ official statement to The Associated Press:

“We are deeply saddened to share that earlier this evening an adult woman died in the park while on the Texas Giant. Park medical staff and local paramedics responded immediately. Since the safety of our guests and employees is our number one priority, the ride has been closed pending further investigation. Our thoughts and prayers are with the family and friends during this difficult time.”

The Cedar Point accident took place as the boat made its incline ascent up the hill. Midway through, the boat began to roll backwards down the hill and flipped over in the process. Cedar Point employees and medical staff rushed to the scene to help the injured passengers out of the water, including one who was reportedly trapped under the capsized boat for several minutes.

In the aftermath Cedar Point has close the Shoot the Rapids ride until park officials can determine what lead to the accident.