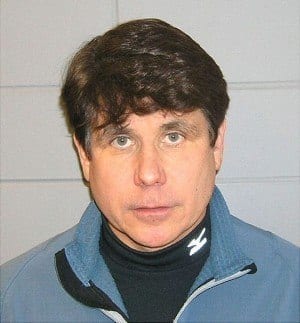 Former Illinois Governor to speak before going to jail

Rod Blagojevich will do what he’s known for best tonight and make one last final statement before he goes to federal prison to serve his 14-year sentence, reports Reuters.

Blagojevich was arrested back on December 9, 2008 under suspicion of corruption, trying to sell Barack Obama’s former seat in the Senate. Blago’s conviction took an astounding three years and two trails for a verdict to finally be handed down by U.S. District Court Judge James Zagel.

Illinois is no stranger to its corrupt politicians though. Blagojevich is the fourth Illinois governor to be convicted of a crime and will be one of two former governors currently time behind bars. Former Governor George Ryan is currently in prison for graft.

While Blagojevich has earned the nickname “Blago,” he’ll by now go under the Colorado prison number 40892-424.

Rod Blagojevich spent two terms as an Illinois governor, earning nearly $150,000 per year, but his new wage will be much less at 40 cents an hour. nonetheless, the Englewood Federal Prison where Rod Blagojevich will be serving out his sentence isn’t what one normally associates with the word prison. It was ranked by Forbes.com in 2006 as one of the best federal prisons to serve time in, given that the inmates are allowed to play pool, ping pong and foosball.

The prison’s schedule will have Blagojevich up before 6 a.m. for breakfast, be counted six times a day and be referred to by his issued umber and not name.

It looks like Rod Blagojevich won’t be playing boats this summer; however, his press conference tonight will undoubtedly be the three-ring circus that ex-governor, and ring master, is best known for.