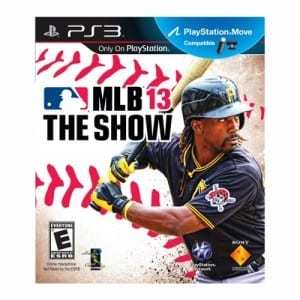 When you’re game is already the best available on the market, it’s hard to implement changes that make it better. The risk is that if you make changes that markedly change the gameplay, you run the risk of alienating your fans; if you don’t make enough changes, those same fans complain that the game may be a simple “cut and paste” of the last iteration. Developer Sony (San Diego) has opted for the latter, and though they’ve made over 50 changes to the game, none are notable enough to sell the game based on changes. That being said, MLB 13 the Show still makes a case as the premier baseball simulation on consoles.

Largely unchanged, the gameplay is still the heavyweight champion of baseball simulations. It’s the options that win it the title, really. Players who enjoy using the thumbsticks to pitch, hit, and field will be rewarded with tight, timing-based controls that are effective, but difficult to master. Simplifying the controls by swapping to timed button presses returns, making the game far easier and giving it a retro-throwback. It’s that customization that extends into other game modes too, creating an experience precisely tailored to whatever it is you prefer.

Despite the magnificent gameplay, there are some visual issues that plague the game during very inopportune time. During some gameplay sessions a small graphical hitch will occur precisely at the moment a pitcher finishes his delivery, resulting in a distraction that draws your eyes from the intended path of the ball. In a game that relies on timing and momentum in order to accomplish even the most minor action, an interruption will destroy your experience. Even one as tiny as a hitch that lasts a millisecond. Granted, powering down the Playstation 3 console and restarting will usually remove the issue, but it’s an issue nonetheless.

The first notable addition is ‘The Postseason,’ a 10-team game mode that allows players to play through the postseason in a battle for the World Series Trophy. For those living in a dorm, fraternity or sorority (yes, seriously), each team can be controlled by an actual person, leading to a fully-customizable, fully-competitive playoff run for one lucky player. ‘The Show Live’ has also been created to give a true-to-life feeling for those who expect a complete simulation from their baseball title. Using MLB.com, the game draws roster changes right down lineups specific to particular days and matchups. Road to the Show, Franchise, Season, Diamond Dynasty, and other modes return, each with minor changes to help streamline or deliver minor changes that help the flow of the game as a whole, but nothing is groundbreaking nor really notable.

Despite limited noteworthy additions, MLB 13 The Show still reigns as the baseball videogame king. Beautiful animations and a variety of modes have riddled the franchise since the beginning; this installment is no different. For players who look forward to the annual baseball release, this year is as magnificent as the last. Those looking to simply get back into America’s past time might be better off saving a few bucks and buying last year’s installment. Whatever your decision, Sony San Diego’s competitors have a lot of ground to make up.