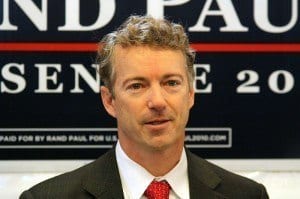 Louisville, KY – “Today I announce with God’s help, with the help of liberty lovers everywhere, that I’m putting myself forward as a candidate for president of the United States of America.” Paul said at a rally in Louisville. Paul, who came about predominately in 2010, with the surge of the “Tea Party”, made the announcement official at a rally in Louisville. “We have come to take our country back,” he told his attending supporters, promising to break up “the Washington machine that gobbles up our freedoms and invades every nook and cranny of our lives.”

Paul, whose new website declares that he’s “running for president,” will immediately start his campaign trail, rolling through New Hampshire, South Carolina, Iowa and Nevada; states which have always been considered the states to vote first in the primaries and caucuses. In his Louisville speech, he called for a Washington reform, by pushing for term limits, and a new constitutional amendment to balance the budget. He told the crowd that both parties are to blame for the current rising debt, which he said has doubled under the Republican administration and tripled under Obama administration.

Speakers at the event, who introduced Paul, made sure to point out that he is a nontraditional, presidential candidate, who has a diverse appeal. These guest speakers included Senator Ralph Alvarado, local clergyman Jerry Stephenson, and a University of Kentucky student, Lauren Bosler. Stephenson, who is black, said, “”He goes everywhere. It doesn’t matter what color you are. Rand Paul will be there.”

Senator Ted Cruz is the only other, current, GOP presidential candidate so far, and whom upon hearing of Paul’s presidential bid, said, “His entry into the race will no doubt raise the bar of competition.” There are others rumored to be announcing their presidential campaigning, to include Jeb Bush, Chris Christie, Scott Walker and Lindsey Graham.

Paul will now be running for two offices at the same time. He’ll be trying to hold onto his Senate seat while also running for president.