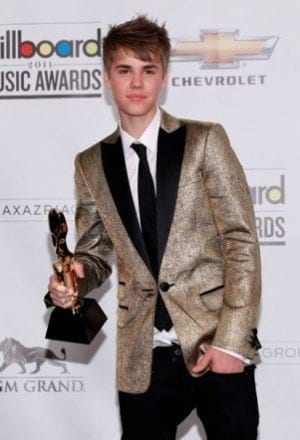 Justin Bieber is causing yet another collective teen panic attack as girls everywhere are learning that he fainted last night at a concert in London.  He was promptly treated with oxygen backstage and rushed to a local hospital.  Bieber is reportedly doing fine this morning and plans to continue with another London concert tonight.

Justin Bieber was taken offstage by a backup dancer after complaining that he couldn’t breathe.  Some panicked fans immediately began crying, while others cheered for his return.  Backstage, the teen pop star was treated with oxygen and taken to a local hospital as a precaution.

According to ABC News, Bieber’s manager, Scooter Braun, came onstage and told the audience at the concert that Bieber had experienced breathing trouble throughout the show, had become light of breath and was backstage with medical personnel- at the time of the announcement.

Last night Bieber tweeted to his 35 million followers, writing, “getting better. thanks for everyone pulling me thru tonight. best fans in the world. figuring out what happened. thanks for the love.”  Bieber also posted a photo of himself on Instagram, where he appears to be lying shirtless in a hospital bed with headphones on, according to ABC News.

Braun, Bieber’s manager, later tweeted “everyone please give him a little space and he will be ok. Im sure he appreciates the support … Tough kid proud night once again he always finishes the show. Full out. True pro…”

The incident ends a difficult week for Bieber.  On Monday, he finally appeared nearly two hours late for his first concert at the O2 in London, according to the Huffington Post.  Frustrated fans booed him as he appeared on stage, though the singer claims he was only 40 minutes late due to “technical issues.”  He took to twitter to explain himself to fans.