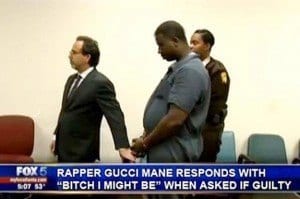 Gucci Mane is the latest target of Photoshop, as a screenshot of a Fox News report with the text, “Rapper Gucci Mane responds with ‘Bitch I might be’ when asked if guilty.”

The picture is probably fake, considering Fox News would most likely not display the word “bitch” on its banner without blurring it out.

Gucci Mane was indicted after allegedly assaulting a soldier at an Atlanta nightclub. The soldier reportedly asked the rapper’s security for a picture with Gucci Mane and was then attacked. The soldier accused Gucci Mane of hitting him in the head with a champagne bottle, after which he had to receive 10 stitches.

Gucci Mane turned himself in March 26 and was denied bond. He was held behind bars for two weeks as the court made its decision. April 9 was when he was indicted. One day after his release, however, he was arrested again for violating his parole.

One of Gucci Mane’s songs is titled “Pillz (Bitch I Might Be),” which reaffirms the probability that the picture is fake. The photo originally appeared on Reddit and Twitter this morning.