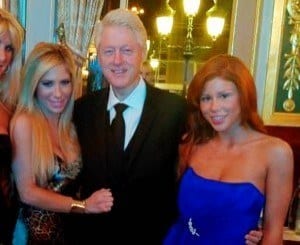 Brooklyn Lee claims that she saw Bill Clinton keeping a close eye on her table, and of course, good old Billy wanted to meet them. But, hoping to avoid negative attention, the Secret Service attempted to play defense to the meet and greet.

“The Secret Service guy wasn’t having it, but then (Clinton) let us come over,” Lee told TMZ.

TMZ reports that Lee had very few words with Bill Clinton, saying. “I just said he was a great President,” she told TMZ.

In response, Lee says, “[Bill Clinton] just kind of winked and smiled and gave us hugs.”

The two starlets were there as guests of Marc Bell, whom is the CEO of the company that owns Penthouse magazine.

Ironically, one of the adult starts was sporting a shoulder-less blue dress. Let’s hope Bubba kept it PG after the party.