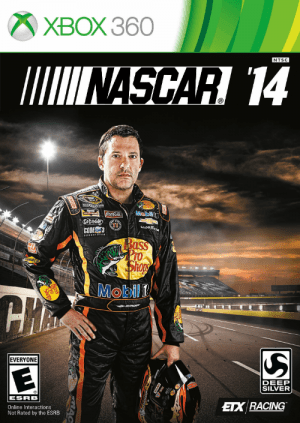 For years the NASCAR series of console games has been mediocre at best. While developer Eutechnyx owns the license to the series, publisher Deep Silver is the newcomer, taking the reigns from the former publishing giant Activision. With that change I found myself suddenly interested in the series once again. It had been years since I last spent any time in the world of NASCAR on any platform, instead opting for other, more arcade-like titles. With NASCAR 14 suddenly under new management, it was worth a peek.

It’s undoubtedly difficult to add variation to a series like NASCAR, which can create some ire among fans who often complain that annual sports franchises are simply “Roster Updates”. While I can’t speak to years past, NASCAR 14 delivers a solid gameplay experience and gives players what they’re expecting: a racing game that simulates the professional sport.

The tracks don’t change, the racers typically stay the same, and it’s always news when someone moves from one team to another or gets a new sponsor. Frankly, NASCAR can be a monotonous business. Thankfully it’s all broken up by competitors screaming through corners at 150mph and tire marks burned into the side their cars. It’s that adrenaline rush — for racers and spectators — that NASCAR 14 puts into digital form. As you tuck in behind a rival and start to draft, you’ll gain speed until the precise moment needed to pass them.

As you’re drafting though, you’ll need to pay attention to your engine temperature to prevent overheating. It’s that authentic gameplay that will appeal to NASCAR enthusiasts. Adjusting car options is also important. While most may joke that professional racing is simply, “Drive fast, turn left,” the truth is there is far more science that goes into a car setup than most realize. Adjusting wheel tilt, wedge, spoiler height, and more will affect how your car handles on each particular track. That level of detail leads to players forming communities that share car setups in order to reach maximum efficiency.

Don’t be off-put by the hardcore players though. As a returning player, I was clearly at a disadvantage. The in-game adjustments that are available will easily level the field. You can adjust the level of difficulty that the AI brings to the track, the number of laps, or how much you want the game to assist your braking and acceleration. This allows people like me to have a fighting chance at being competitive in areas where we’re unfamiliar.

The game modes are quite common, with “Season Mode” and “Race Now” available if you want to race as your favorite driver. Career mode sees you starting off as a rookie, working your way up the ladder by earning sponsors. Different sponsors offer different monetary benefit which allow you to increase the hardware that’s under the hood or attached to your chassis. If you’ve played any of the Madden or NBA 2K franchise, you’re already familiar with this. The classic options for creating your own paint schemes were also quite nice, despite the lack of your mainstay sponsors like Bud Light.

Online mode is also available, both privately and publicly. Public matches are filled with people all eager to do one of two things: put you in a wall, or bitch at you for not being as good as they are. That’s not any fault of the game of course, but more the community within. To avoid those of the community that are toxic, you can schedule private races and have just your friends involved. Unfortunately, if you’ve only got one or two friends, the lack of AI inclusion during these races usually leads to a pretty boring experience.

Finally, the level of detail was initially surprising, with many different paint schemes available for each driver, including the date where each scheme appeared. But in the situations where you get a group of 20 or more cars bunched up and someone makes a mistake to cause a wreck, you might get to see the underside of the cars. In that instance, you’ll be surprised to see a flat piece of nothing. No details whatsoever. For someone like me, who is often included in these fantastically ridiculous wrecks, it’s off-putting. Additionally, during replays of the wrecks that the game automatically triggers, the framerate drops to an embarrassing 1fps. ONE.

Eutechnyx knows how to handle the NASCAR license, else they wouldn’t still hold the rights to it, but they’ve still got some ground to make up. Upgrading to next-gen might be the answer, or it might be as simple as getting Deep Silver behind it, a publisher that is consistently passionate about their games, top to bottom. There’s nothing particularly awful about NASCAR 14, but there’s nothing that leaps out to make this a must-have either. NASCAR 14 is definitely a step in the right direction, but comes up short of taking home that checkered flag.