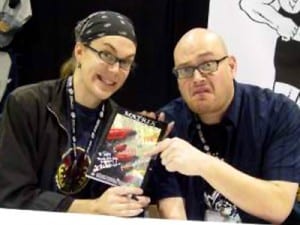 Larry Wachowski, the director behind the Matrix movie franchise, has come out as a pink-haired transsexual named Lana.The Matrix director sex change may not come as a surprise to some, as Larry Wachowski has been undergoing the process for quite some time.

In a trailer for his latest film, Cloud Atlas, Larry Wachowski says in a quiet voice, “Hi, I’m Lana.” It is the first time since the Matrix director sex change that Larry has come out as Lana.

Cloud Atlas, which will star Tom Hanks and Halle Berry, is slated to be one of the most anticipated movies of the year. Based on the hit book by British author David Mitchell, the movie will focus on six interlocking stories beginning in the 1800s until  the future. Hugh Grant, Jim Broadbent and Susan Saradon also star in the film.