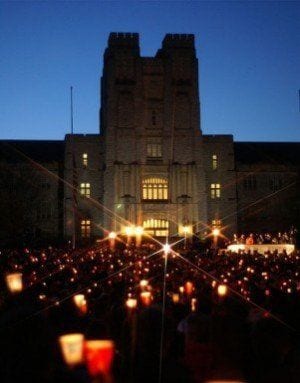 Virginia Tech students were encouraged to attend class Monday, April 16, marking the first year the school hasn’t suspended instruction to mark the five-year anniversary of the school’s 2007 massacre that left 32 people and the gunman dead.

In the years since the deadliest mass killing in contemporary American history, Virginia Tech classes have been canceled with this being the first year the normal schedule will resume.

Provost Mark McNamee, who chaired a committee that planned memorial events in the years follwoing the shooting, said the return to classes reflects the lives of those slain. “Their passion for education, their desire to do good in the world, their commitment to their disciplines come through so strongly that we felt being in classes was one special way of remembering them onward,” McNamee said. “This is what they did, this is what we do, and it’s important to us.

“My sense is that our students and our faculty are ready for it,” he said.

Virginia Tech marked the five-year anniversary at midnight with the lighting of a ceremonial candle that will remain lit for 24 hours. Gov. Bob McDonnell was scheduled to speak at a campus-wide candlelight vigil. The Virginia Tech Corps of Cadets stood guard for 32 minutes – one minute in honor of each of the victims, and they will do so again tonight before the candle is extinguished.

At 9:43 a.m. Monday — the time when gunman Seung-Hui Cho began killing 30 students and professors at Norris Hall — McDonnell called for a moment of silence in Virginia. The Capitol Square Bell Tower in Richmond also tolled for each victim.

Also, scheduled for Monday is a picnic, a display of memorial items sent to Virginia Tech from other colleges and universities, performances and an open house at Norris Hall, where the shooter ultimately killed himself.  The former classroom building has been transformed into the Center for Peace Studies and Violence Prevention. Several locations on campus have also been set aside on campus as “quiet places for reflection.”