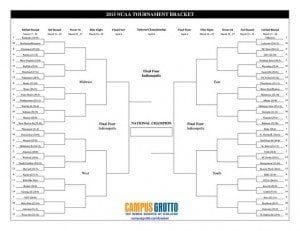 As you college basketball fans already know, the past week has been what us fans have waited all year for: March Madness. For those of you not up to date on college basketball, the NCAA Men’s basketball tournament has 68 of the best basketball teams in the country going head to head. After playing a number of games, the championship is finally reached. We’re already heading into the Sweet 16 games starting tomorrow. I thought it’d be a good idea to get us all up to speed and preview the games coming up this weekend. Side note: the numbers listed beside the team names are what the NCAA ranked each team going into the tournament during Selection Sunday. Many big seeds have already went down. Most notably, 1 seed Villanova who was beaten by NC State (8 seed) in the third round. 2 seeds Kansas and Virginia were beaten by Wichita State and Michigan State. Now, that’s about it. Let’s get into the matchups and what upsets might go down.
Thursday night games:

Wichita State (7) vs. Notre Dame (3)
In my own personal bracket, I have Wichita State over Notre Dame. The Shockers are coming off of a big win to their in state rivals the Kansas Jayhawks. Surprisingly, Notre Dame is rated as the 1-point underdog going into this game. All in all, it’ll be an offense vs. defense matchup. The Fighting Irish was rated the 12th best offense while Wichita State was ranked the 6th best defense. Expect it to be a physical game that’s all going to come down to which team can find a way to score.
Prediction: Wichita State 71, Notre Dame 70

Wisconsin (1) vs. University of North Carolina (4)
With one number one seed already out, Wisconsin has even more pressure to win this game. They are predicted to win by 5.5 points but regardless, the team will be faced with its biggest challenge yet. Wisconsin has already won their games by much fewer points than was previously predicted. They aren’t shooting the ball as dominantly as many expected them to. If UNC can uncover their weaknesses, I’d say UNC can definitely win this one.
Prediction: UNC 80, Wisconsin 78

West Virginia University (5) vs. Kentucky (1)
Even if you aren’t a follower of college basketball, it’s nearly impossible to not hear the news about Kentucky. The team has had a perfect season so far with a 36-0 record. They are also the biggest favorite to win the whole tournament. They have been tested a few times, but they’ve managed to somehow pull through and get the win. I’m certainly biased with this game, I’m born and raised in West Virginia so WVU basketball means a great deal to me. All bias aside, the Mountaineers have had a terrific season with senior Point Guard Juwan Staten leading the way. As much as I hate to admit it, it’s going to be a challenge for the Mountaineers to win this one. We aren’t the best when it comes to shooting but our defense is very good, so is Kentucky’s. Expect this one to be a low scoring, defense heavy game.
Prediction: Kentucky 65, WVU 58

Xavier (6) vs. Arizona (2)
Xavier has a good history with getting wins in the NCAA tournament. However, my prediction is this run is just about to come to an end. The Wildcats could have easily been a 1 seed, they have dominated so far. They are the 11-point favorite going into the game. I think it will end up a little bit closer than that but Arizona should be the winner.
Prediction: Arizona 72, Xavier 68

UCLA (11) vs. Gonzaga (2)
Many people didn’t even think UCLA deserved to be in the tournament at all. Yet they’ve managed to earn some respect by pulling out several wins. I just think Gonzaga would have to be playing an extremely off game for UCLA to win. The Bulldogs are the 10-point favorites in this matchup. One of the big statistics that stands out to me is that number 2 seeds have won eight of their last nine games in the Sweet 16.
Prediction: Gonzaga 76, UCLA 64

NC State (8) vs. Louisville (4)
This is an interesting matchup. Just a few weeks ago, the Wolfpack beat the Cardinals on the road. This is still a pretty recent win. Louisville is a solid team who’s had a nice run so far in the tournament. NC State has been a fun team to watch. They have been hot after managing to beat LSU in a comeback effort and then taking down the top seeded Villanova. I’m going to have to take the Wolfpack here.
Prediction: NC State 78, Louisville 76

Utah (5) vs. Duke (1)
Utah is a scrappy defensive team that will likely be a challenge for Duke. I predict this will be low scoring and physical throughout the whole game. However, there’s really no statistics that can predict that Utah will be able to pull this one off. Duke has had dominant wins this whole season and doesn’t seem to be slowly down just yet.
Prediction: Duke 55, Utah 45

Michigan State (7) vs. Oklahoma (3)
MSU has a terrific dynamic player in Travis Trice, who helped lead the Spartans pretty easily over a good Virginia team. This one should come down to the very last minute. Oklahoma is also a very good team both offensively and defensively. They certainly won’t go down without a fight.
Prediction: MSU 80, Oklahoma 78