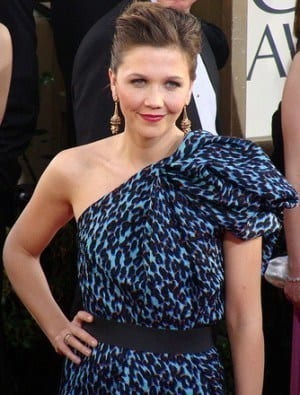 Maggie Gyllenhaal is a mom for the second the time. The lesser-known of the two Gyllenhaals kept her pregnancy under lock and key, but her and actor husband Peter Sarasgaard added baby girl Gloria Ray to their family.

“I find it difficult to pretend you’re not pregnant, which I had to do,” Gyllenhaal told US Weekly. “I didn’t let anyone know until three and a half months this time. I went to film festivals. I’m throwing up in the bathroom and having to keep pretzels in my purse, and having to fit into dresses

Maggie Gyllenhaal first became a mom back in 2006 and, as she told Us back in 2010, has since had trouble juggling both her career and family life.

“I had been so focused on Ramona, and she’s been everything to me, but I’m also an actress […] It’s not possible to do it perfectly.”

Maggie Gyllenhaal made her film debut back in 1992’s Waterland, playing opposite her father. She didn’t truly find fame until her role in the bondage-themed film Secretary. Maggie Gyllenhaal also received much criticism for her role as Rachel Dawes in The Dark Knight. Many fans of the film felt a more attractive actress should have been cast to play Bruce Wayne’s love interest.

Though, Maggie Gyllenhaal’s husband is less concerned about his own career and more on how his daughter Ramona will handle having a younger sister.

“I’ve seen kids with siblings — I don’t have any siblings, so I don’t know — but they generally go for about five minutes, ‘Oh, cool! Anyway, what are we going to do now? Can we return it?'” he told reporters in February. “I think it gets boring quickly, at first, and it takes a while for them to bond,” reports Us.