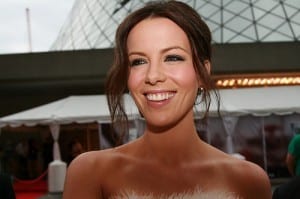 In a recent interview, Kate Beckinsale revealed she had reservations about squeezing back into her “Underworld” catsuit, says Inquisitr.

The glamorous British actress said she was “overwhelmed” by the variety of food choices available in New Orleans, where she filmed the recently released “Contraband”, also starring Mark Whalberg.  After indulging in the local flavor, she realized she would need to shape up again to slide back into the skin tight suit her vampire warrior character Selene dons in the “Underworld” films.

“New Orleans is a wonderful city, but it’s not the most fantastic place to get in shape because we want to go try those beignets and all those wonderful things,” she said.  She goes on to say that she got back into training for the film, but that overall “it was a miracle” she was able to wear the suit again.