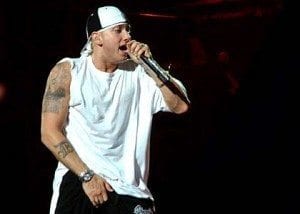 Eminem breaks world record for rap song with the most words.

Despite the fact that almost every rapper in the world claims to be the best rapper to ever live, there’s no doubt that Eminem dominates the list of some of the best, if not the best rapper of all time and his record sales prove it.

Eminem is noted as the best rapper of the 2000’s having sold more than 115 million albums sold in the U.S. and more than 40 million worldwide.

While many may refute the claim that he’s the best rapper ever, one thing is certain: he’s set records that are hard to top and recently made it into the 60th edition of Guinness Book of World Records 2015.

Eminem who released his song, “Rap God”  in 2013 from his eighth studio album, The Marshall Mathers LP2 has broken the record for the rap song containing the most words. The six-minute-long track contains 1506 words and has one section that contains as many as 97 words over a 15-second time lapse.

Eminem isn’t alone in the new addition of the Guinness Book of World Records, he’s accompanied by Miley Cyrus who earned herself most searched popstar, Shakira is the most liked person on Facebook, while pop-queen Katy Perry has the most Twitter followers.

Check out the record-breaking track here.