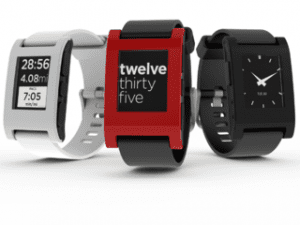 The Pebble watch was the most funded project in Kickstarter history

The Pebble E-Paper Watch started as a project on Kickstarter with the aim of raising $100,000 to develop an all-new type of watch, dubbed a “smartwatch” that would run its own apps and interface directly with Android and iOS devices. That goal was met within two hours of the project going live, and The Pebble ultimately ended up with over $10 million in pledged contributions, 100 times the amount the project creators were seeking. It stands tall as the most-funded campaign in the history of Kickstarter, and it raised far more money via the crowdsourcing site than it did from traditional investors.

The Pebble watch itself  features a 1.26-inch 144 × 168 pixel monochrome LCD display equipped with a backlight, accelerometer, and light sensors. After popular support from Kickstarter allowed the creators the funds to implement it, the watch is also totally water-resistant. Built-in apps included a cycling speedometer, GPS, and a golf rangefinder, in addition to the Bluetooth necessary to connect with smartphones.

The Pebble is known for its striking design and the plethora of watchface designs it’s capable of displaying, the most notable of which is the face that just reads the time in words, showing “Eight Thirty Five” in a smooth sans-serif font instead of the traditional “8:35” of most digital watches. The watch will retail for $150.00 when it goes on sale later in January.