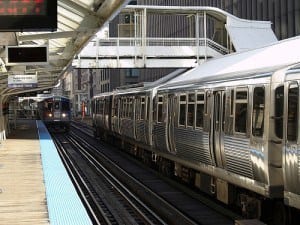 Police are investigating the cause of the Blue Line collision.

An out-of-service blue line train is suspected to have been hijacked this morning during rush hour. The runaway train collided with another blue line train at 8 a.m. in Forest Park, resulting in dozens of injuries.

According to Lambrini Lukidis, CTA spokesperson, the out-of-service train crashed into an outbound blue line train at the Harlem station. Robert Kelly of Amalgamated
Transit Union 308 told CBS Chicago that the train was probably traveling at 20-25 mph. The crash sent 33 people to 9 different hospitals with injuries. There were no passengers on the out-of-service train. The number of CTA workers is unknown.

CTA officials have confirmed that the runaway blue line train was on the wrong tracks. They claim that the cause of the accident was probably mechanical malfunction due to the fact that a key would be required to start the train manually. Police, however, are treating the crash sight as a crime scene.

Blue line service has been temporarily suspended between Forest Park and Kedzie. Shuttle buses are being used to supplement transportation needs. However service will be restored soon.

Police and CTA personnel are currently investigating the cause of the crash.