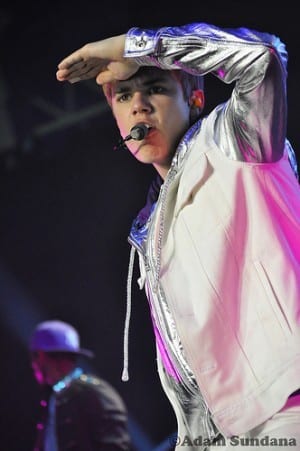 Beibs spews on stage in Arizona

Justin Bieber throws up on stage during a performance in Arizona, and the aftermath is a slew of viral videos of the singer getting sick and everyone avoiding the mess. On the first stop of many in his Believe tour, the singer vomited during the first song of the night, Out of Town Girl.

In the video captured by many and shared on YouTube, in the middle of his performance suddenly Justin Bieber throws up on stage, hands on his knees and turned away from the spectators at the Glendale, Ariz. arena. After the initial vomit, Bieber ran backstage where he saw medical attention.

Once he returned to his awaiting fans, he performed Never Say Never and the beginning of Beauty and the Beat before again exiting the stage. Luckily for his collaborator on Beauty and the Beat, Nicki Minaj, that song was performered through previously-taped footage.

After this second incident, Justin Bieber was able to finish out the show with an encore. The singer even asked for the audience’s sympathy, “It’s hard for me, you know, not feeling great and throwing up in front of a bunch of people. Will you love me even though I’m throwing up on stage?”

Despite videos titled Justin Bieber throws up on stage, Beliebers still swoon over the 18-year-old pop star, and yes they still love him. Fans can catch Bieber during his 45-city Believe tour, which continued Sunday at the MGM Grand Garden Arena in Las Vegas.