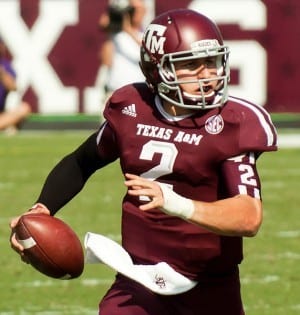 Johnny Manziel is facing controversy for his early exit from the exalted Manning Passing Academy, where he was a counselor. During a Wednesday appearance at SEC media days, Manziel deflected questions about whether he’d been drinking excessively or hung over.

“That’s absolutely untrue,” Manziel said, disputing accounts that he was asked to leave the camp early.

Manziel simply stated that there were “social events” associated with the camp, that he missed scheduled events when he overslept Saturday morning, and his cell phone died preventing contact.

“Just another day,” said Manziel during the press conference.

This is yet another chapter in Manziel’s career since he won the Heisman trophy last December. He was unapologetic about an off-season filled with larger-than-life exploits, and yet said several times that he wanted to live “like a normal, 20-year-old college kid.”

Manziel also compared himself to LeBron James and Justin Bieber as he spent the morning followed by a large entourage and an even larger media component.

This kind of attention hasn’t been seen since Tim Tebow got onstage. After becoming the first freshman to win the Heisman following a record-setting season, expectations have skyrocketed for the Texas A&M Aggies’ best player—that is, as soon as he’s ready to get back to work and football.

Last summer was incredibly different. At that time, Manziel was a relative unknown who hadn’t even won the starting job and A & M wondered how it could possibly compete in its new league.

Needless to say, it’s quite different now. Since winning the Heisman, seemingly everything about Manziel’s high profile has publicized everything about his wild off-season. From his online classes, courtside seats at NBA games, visits with LeBron and other stars, spring break in Cabo, and his round of golf at Pebble Beach all grabbed the spotlight.

Then after he got a parking ticket last month, Manziel’s angry tweet that “(expletive) like tonight is a reason why I can’t wait to leave college station…whenever it may be.”

“Is he perfect? No. I think he’s done some things he’s not very proud of, has made some poor decisions,” said Sumlin. “He’s made some good decisions. Unfortunately, the poor decisions are the ones that are really publicized.”

Manziel’s possibly overachieved goal of “enjoying life to the fullest” and off-season pursuits being compared to his playing style—barely controlled chaos—didn’t seem to faze him as he fielded questions.

“Crazy is a good way to describe how others see it,” Manziel said. “For me, it’s been fun working out, living life and just enjoying it.”

Previous ArticleRoyal baby's birth this weekNext Article“Whose Line is it Anyway”: The Remake