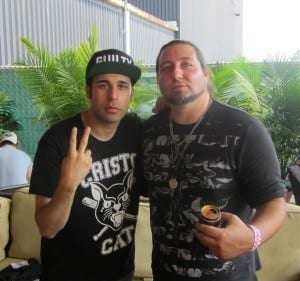 I got to sit down backstage at the Mayhem Festival with the, as he put it, “clean singer” of the band Islander, Mikey Carvajal.  Islander are the new kids on the Metal scene, but they are blessed with a veteran musicianship and stage presence.  Some journalists have been comparing the band to P.O.D., Bad Brains and the Nu Metal scene, but if Islander plays their metaphoric cards right, make just the right bluff at just the right time they could take the whole poker tournament.

It is not surprising that the band attracts fans the second they hit the stage.  I talked to a few people in the crowd about the Islander set and just about everybody said that they were an awesome show.  So, I took the opportunity to really get down to who and what it is that might make this band so attractive to fans.  I also really wanted all of you to know who Mikey is, being that they are so new to the scene.

Kidman J. Williams:  I’m not going to lie to you; you kind of fell into my lap at the last minute.

Mikey Carvajal:  What do you mean?

KW:  They gave me the interview at the last minute, so I don’t know a whole lot about you.

MC:  Well, that’s what interviews are for right?  (laughs)

MC:  You can ask me anything, it doesn’t even have to be about music.  I’m a wrestling fan!

KW:  Well there we go!  We can start there.  Who’s your favorite wrestler?

KW:  How excited are you to see Sting in the new WWE game?

MC:  I’m very excited!  I don’t even have a system to play the game on, but I know if you preorder the game you get Sting.  So, I’m going to preorder it so when I do have a system.  (laughs)

MC:  Its going well, it is a little tight quarters sometimes.  We make due and we’re thankful for what we have.  We have my wife out with us right now and she is running our merchandise.  So, it is a little different having a woman in the van, but she is holding up awesomely!  I don’t know a lot of women that could hang as well as she does.

KW:  How long have you been married?

MC:  We have a dog named Charlie that I brought into the marriage.  He’s a little long haired Chihuahua.  He is so awesome!

MC:  Really?!?  My wife and I love little girls with boy names.  It is so cute!  We talked about when we do have kids we want to name a girl Elliot.

MC:  Judah is a pretty name for a girl.

MC:  That’s pretty funny.  My friend Sonny from POD named his daughter Nevaeh.  In fact, I think he was in the news for it.  That name blew up after that.  It is a really pretty name.

KW:  How long have you guys been around now?

MC:  We’ve been Islander now for 3 years, I’m horrible at math, but yeah, it has been like 3 years now.

KW:  (laughs) I checked out a few of your songs and you won me over immediately.

MC:  Thank you man!  I really appreciate that.

KW:  It is a little different.  Is the sound something you worked at or did it come natural?

KW:  What is the age range in the band?

KW:  Have you guys gotten a chance to get out and about in Chicago?

MC:  Not today, our label (Victory Records) is based here in Chicago so we’ve hung out here a good bit.  We’ve shot videos here and we got to eat the Chicago hot dogs, the Chocolate Cake Milk Shake at Portillo’s, the deep dish pizza; so we got to experience quite a bit out here.  Today though, we’ve just really been at the fest.

MC:  Like, out of all the things I’ve seen here in Chicago?

MC:  I got to see the Family Matters house!  I got my picture taken in front of it.  My wife and I watch 90’s sitcoms at home all the time.  Family Matters is one of my favorites!

KW:  Did you ever see the movie “Stir of Echoes” with Kevin Bacon?

KW:  I’ve been in the neighborhood that that was filmed in.

KW:  When you see the movie and walk through it does give you that creepy vibe.

KW:  Have you ever played the…uh…what is the name of that place on the Southside?  I completely had a brain fart.  My brain just sharted.

KW:  It’s, something Rockhouse on the Southside.

KW:  That’s a place that you could get your van broken into.

MC:  (laughs) Is it really?  Well, when we played there last year it was freezing cold outside.  I’d assume that everyone who would break into a van was inside trying to stay warm.

KW:  (laughs) It is worse in the summer.  There is a rumor going around that Chicago is now the murder capital.

KW:  Yeah!  So, how many albums have you released now?

MC:  Violence and Destruction is our debut album; it has been out since July 8th.  We’ve had 2 EP’s and an independent release.

KW:  Then that wasn’t your first.

MC:  (laughs) Yeah, but those are just EP’s.  This was our first actual album, like, A RECORD!  You know man?  It is like our real introduction.

KW:  I got you.  How do fans seem to receive Islander?

MC:  They have been awesome!  It is weird for little ‘ol us from South Carolina to come to California or Chicago and see people singing our lyrics back to us, we’re just like wow; this is impacting people.  It is just weird for people to do that to me, but I do that to bands too.  I write the lyrics in the bathroom or lying on my bed and all these people are singing them back.  It is just cool!

KW:  Anybody at home you want to shout out too?

MC:  My dog Charlie, WHAT’S UP!  I can’t wait to have playtime with you!  My Grandma, my Mom and Dad and my whole family; PEACE, love you guys!  It’s been a pleasure talking to you!