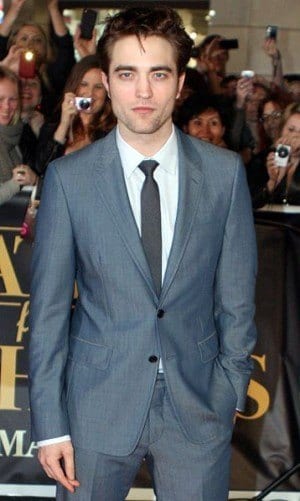 Is 28-year-old actor, Robert Pattinson off of the market? Sources of PEOPLE report that Patterson has proposed to his girlfriend of just six months FKA Twigs. T-Pain reportedly made the comment that Twigs might not be recording on his new album because she was just engaged. He also took to Twitter, but recanted, saying that it was just an April fool’s joke.

Last September, Pattinson and Twigs were first spotted together, followed by a sighting in Miami the following December, while in Miami during the Art Basel. The source to PEOPLE said that the two had exchanged promise rings. “He wants to marry her,” the source said. They are inseparable when they are together. They live at his house.”

Pattinson’s former romance to actress, and Twilight Co-star, Kristen Stewart ended after a cheating scandal, in which Stewart was exposed running around with director, Rupert Sanders. When asked about the cheating and the scandal surrounding it, Pattinson responded, “Sh*t happens, you know? It’s just young people, its normal! And honestly, who gives a sh*t?” Pattinson has made no effort to break the news to Stewart, as far as anyone knows.

FKA Twigs is the stage name for Tahliah Debrett Barnett. She is a British singer-songwriter, producer and dancer. Her risqué image in music and videos have been described as slightly different. Her song ‘Glass and Patron’ in which she wrote and directed the video for, are a little ‘different’. In the video she appears to wear a pregnancy prop, and gives birth to a scarf.

In recent interviews, she describes the relationship as great, but the fact that the paparazzi is always after them, is something that she could do without. When asked if Pattinson was worth all of the hounding, she said “Yes.”