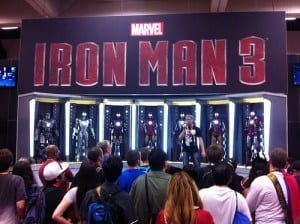 It’s no surprise that the previous two were box office worthy, but with the release of the most recent, “Iron Man 3” takes it for the win. Robert Downey Jr. comes through full-throttle with one mission: to be the best of the best in the superhero industry. His character, Tony Stark, takes Iron Man to a whole new level. With his bad boy image combined with his billionaire income, Iron Man faces his Marvel comic book nemesis the Mandarin, played by Ben Kingsley. As the Mandarin enters the film, he steals the show, wowing audiences in overcrowded theaters every where.

With respective box office success from Iron Man one and two, coming in at $585 million and $623, “Iron Man 3” grossed $173 million during its opening weekend, May 3rd in the U.S. This was the second biggest debut for Disney’s studio, arriving just behind “Marvel’s The Avengers”. Globally, Iron Man 3 has already earned $680.1 million. Writers Shane Black and Drew Pearce certainly knew what they were doing. The film has already defeated box office sales of both previous Iron Man movies.

Robert Downey Jr. has certainly had his share of success since 2008. This is his fifth movie to top $500 million around the globe and his fourth Marvel film. If “Iron Man 3” ultimately exceeds the $1 billion mark, Downey will be standing next to Christian Bales and Johnny Depp as one of the lead actors with multiple films.

Familiar faces return to the screen such as Pepper Potts (Gwyneth Paltrow), the girlfriend of Tony Stark and Colonel James Rhodes (Don Cheadle) as a specialized agent with the US Army. New to the film is 11-year-old Ty Simpkins playing Tony Stark’s buddy, Harley Keener. Not only has “Iron Man 3” exceeded expectations, but has future superhero films feeling nervous and uneasy of their chances with a successful box office outcome.