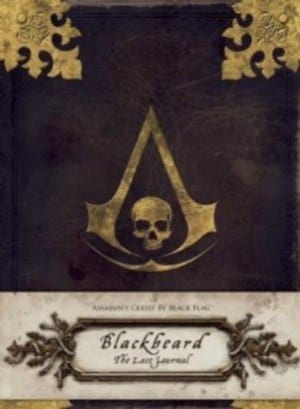 We’ve all got our favorite gaming franchise. You might obsess over Call of Duty, or have a weekly raid in World of Warcraft. You might even boast about your six max-level characters in Diablo III, but whatever it is that you’re a fan of, there’s a market for it outside of the digital world that you exist in. We can’t play video games 24 hours a day, seven days a week (trust me, I’ve tried), but that doesn’t mean we can’t enjoy your favorite digital world in a non-digital capacity.

a href=”http://www.insighteditions.com/”>Insight Editions exists to help with that and recently sent me a copy of Blackbeard: The Lost Journal from within the Assassin’s Creed IV: Black Flag universe. I’m a huge fan of the Assassin’s Creed lore as a whole, so getting to peek into a different character’s perspective intrigued me. The series, for those not familiar, takes historical events and tells them in a way that makes it seem that secret societies are running the world. A fun conspiracy theory with enjoyable gameplay mechanics.

The book is a magnificent addition to an interesting franchise. For those who have played Assassin’s Creed IV: Black Flag, you know that Blackbeard is an important character throughout the game. Edward Kenway, the main character, meets up with Blackbeard a number of times throughout the story of Black Flag, but The Lost Journal chronicles Blackbeard’s own adventures during the periods when he’s not with Kenway.

The first thing to know about Insight Editions is that the quality of their work is impeccable. The spine and binding of the book is surprisingly durable, even after excessive use and exaggerated opening. The pages are made of paper that is durable and borders on card stock, ensuring no accidental rips occur. Even when you’re inside the book, the maps and visual aids that help enhance your experience are glued on in a way that ensures nothing is accidentally removed.

The quality alone is enough to justify the $39.99 price. It’s the content that makes it a bargain.

Granted, not everybody is going to spend that type of money unless they’ve bought into a particular franchise. It’s not just words on paper, though. As mentioned, there are added attachments, pictures, and side notes included by Blackbeard and his mysterious author throughout the entirety of the book. The story, told alongside the narrative we know from Assassin’s Creed IV: Black Flag, weaves masterfully in and out of Kenway’s own tale, resulting in a piece of literature that could be seen as a companion to the game.

Be warned though, once you start down the hole that is Insight Editions, it’ll be hard to stop.