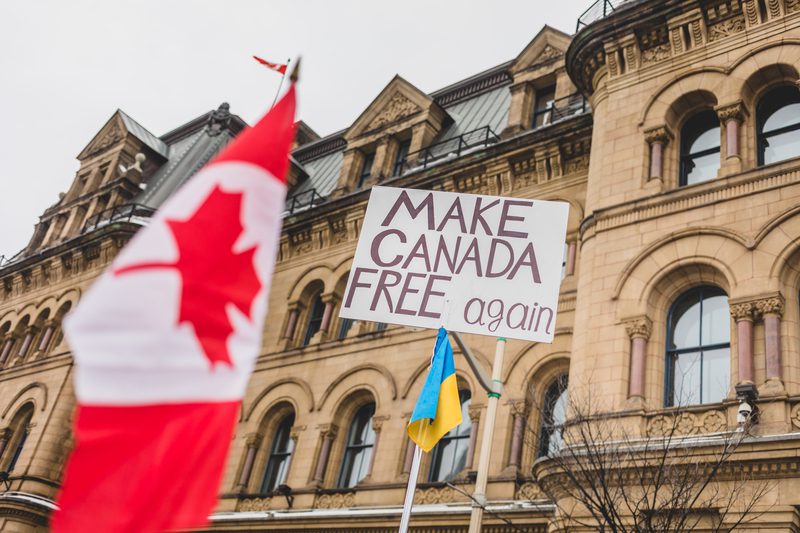 About 44 percent of the nearly $10 million in contributions to support the protesters originated from US donors, according to an Associated Press analysis of leaked donor files. US Republican elected officials, including Texas Sen. Ted Cruz and Georgia Rep. Marjorie Taylor Greene, praised the protesters, calling them “heroes” and “patriots.”

Fox News host Sean Hannity told two protest organizers on his show Wednesday that “you have a lot of support from your friends in America. I can tell you that. He added: “We have a movement in the United States that is starting very soon.”

Prime Minister Trudeau and other top Canadian officials have harshly criticized financial support from other countries.

“What this country is facing is a targeted, coordinated and largely foreign-funded attack on critical infrastructure and our democratic institutions,” Bill Blair, the UK’s minister for public safety and emergency preparedness, said earlier this week. Canada.

Ian Reifowitz, a professor of historical studies at the State University of New York, called the protests a “gift” for Republicans in the US, predicting they will use the populist appeal of the rallies to raise money ahead of the election. mid-term in November.

“They constantly need new outrages,” said Reifowitz, author of “The Tribalization of Politics: How Rush Limbaugh’s Racially Harassing Rhetoric on the Obama Presidency Paved the Way for Trump.”

“It’s a big (problem) eight or nine months before the election for them,” he said. “It allows you to deposit money, deposit volunteers, and energize the base, which is what you want to do.”

Protesters in Ottawa have regularly been given fuel and food, and the area around Parliament Hill has at times resembled a spectacular carnival with bouncy castles, gyms, a playground and a concert stage with DJs.

GiveSendGo, a website used to collect donations for Canadian protests, has raised at least $9.58 million, including $4.2 million, or 44%, that originated in the United States, according to a database of donor information posted online by DDoSecrets, a non-profit group.

However, the government in Canada have been working to block protesters’ access to these funds and it is unclear how much of the money was ultimately raised.

Millions of dollars raised through another crowdfunding site, GoFundMe, were blocked after Canadian officials raised objections to the company, which determined the effort violated its terms of service regarding illegal activities.

The GiveSendGo database analyzed by the AP showed more than 109,000 donations as of Friday night to campaigns in support of the protests, with just under 62,000 coming from the US.

The GiveSendGo data listed multiple Americans who donated thousands or tens of thousands of dollars to the protest, with the largest single donation of $90,000 coming from a person who identified himself as Thomas M. Siebel.

Siebel, the billionaire founder of the software company Siebel Systems, did not respond to messages sent to an email associated with a foundation he runs and to his LinkedIn account.

A representative from the Siebel Scholars Foundation, who signed her name only as Jennifer, did not respond to questions about whether she had donated the money. But he said Siebel has a history of supporting various causes, including efforts to “protect individual liberty.”

“These are personal initiatives and have nothing to do with the companies you are associated with,” he wrote.

Siebel has donated hundreds of thousands of dollars to Republican candidates and organizations over the past 20 years, according to Federal Election Commission records, including a $400,000 contribution in 2019 to a GOP fundraising committee called “Take Back theHouse 2020”.

The GiveSendGo Freedom Convoy campaign was created on January 27 by Tamara Lich. He was previously a member of the far-right Maverick Party, which calls for Western Canada to become independent.

The Canadian government took steps earlier this week to cut off funding for protesters by expanding the scope of the country’s anti-money laundering and anti-terrorist financing regulations to cover crowdfunding platforms such as GiveSendGo.

“We are making these changes because we know that these platforms are being used to support illegal blockades and illegal activities, which is hurting the Canadian economy,” Canadian Finance Minister Chrystia Freeland said.

Perhaps more important than the financial support is the support protesters in Canada have received from leading conservative American politicians and pundits, like Hannity, who see kindred spirits in their neighbors to the north who oppose vaccine mandates.

The same day that Lich created the GiveSendGo campaign, retired Army Lt. Gen. Michael Flynn shared a video of the convoy in a post on the Telegram messaging app.

“These truckers are fighting back against nonsense and tyranny, especially from the Canadian government,” wrote Flynn, a former head of the Defense Intelligence Agency who briefly served as national security adviser to former President Donald Trump.

Previous ArticleWhat are Joro Spiders and How Can They Help in Agriculture?Next ArticleIs Modern Life Making Today’s Youngsters More Depressed?