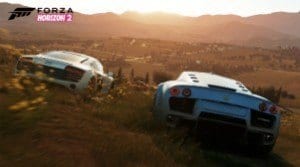 The sequel to the smash hit of 2012, Forza Horizon 2 builds on the open world, arcade racing that made the first so popular on Xbox 360. Releasing for Xbox 360 and Xbox One, the superior version is clearly on Xbox One. I was a bit reserved going into the Horizon 2 world because I haven’t played the first installment. Seeing the reaction it got though, including some “Game of the Year” awards, I wanted to see what the big deal was. I’m glad I did because the game is great.

I’m a fan of racing games, but I’m not good at them. That means when I find a game I’m semi-decent at, games like Blur, the Burnout Series, or Split Second, I tend to stick to them for a long time. Clearly, you can see that I prefer the arcade racing circuit over the simulation one, mostly because I’m not a precision driver. With Forza Horizon 2, you don’t have to be.

For newcomers, there are difficulty setting that will allow you to get a handle on how the game reacts to your turning, braking, and drifting. It’s an arcade racer, but not to extremity of games like Burnout, which works well because of the landscape. This year the Horizon Event has players gallivanting across southern Europe’s beautiful countryside and weaving through busy streets.

The transition between areas is quite brilliant, too. First, the map is monstrous and takes a considerable amount of time to simply drive from one end to the other. Even if you opt to go off-roading, blazing through open fields and slaloming trees, you’re still going to find that a cross-country drive is time consuming. The brilliance of the map design is how it gradually transitions from country to city, roads transforming from long, winding speed-friendly paths to twisting city areas, perfect for drifting and requiring more precision to navigate.

Out in the world are events to take place in, as well. Bucket list challenges require you to complete tasks of varying difficulty, Barn Finds set you off to discover and restore old classic automobiles, but perhaps the best implement is the Drivatars. Drivatars are digital representations of your friends and other people who have played the game. They exist in your world, taking cues from the actual player and transferring their style to your game. Drivatars can be raced, and some have bounties on them, meaning you can race them to a certain point in order to earn an increased reward.

The rewards are simply “credits” that you can use to purchase new vehicles, paint schemes, and upgrades for cars you already own. There are hundreds of cars to choose from, all settling in a particular class, with each class opening up a specific championship for you to finish. Winning 15 championships earns you the right to the finale, but there are more than 150 championships overall.

With Car Clubs (effectively “Clans”), you’ll earn extra cash towards purchasing upper-tier vehicles to race and you can create a roster of racers that will work towards upgrading the club’s rank. Each racer also earns XP towards leveling up, with each level earning a “Bonus Spin” that can earn a random denomination of credits or even a car.

With so much to do in such a gorgeous environment, there’s no wonder why the Forza Horizon series is at the top of racing fan’s lists. Even for beginners like myself, there are modifications to make the game feel easier and, as you get better, you’ll begin to earn bonuses towards the credits you earn when you start turning the difficulty up. There are areas where you can drive as fast as you want, flying over hills and jumps, burning down straightaways, and there are gorgeous castles and ruins to explore with winding, twisting corners. It satisfies all racer’s needs.

While the Xbox One is still less than a year old, for anybody who’s looking for a racing game, you won’t find one better than Forza Horizon 2.