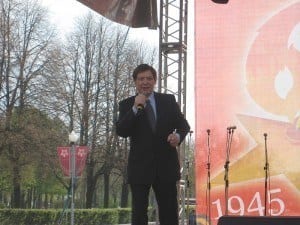 The trolololer will be remembered

Khil raised a white flag Monday morning in St. Petersburg, Russia from stroke that succeeded brain damage. Eduard Khil suffered the stroke in late May and had been hospitalized since.

Claiming fame in The Soviet Union in the 1960s and 1970s for his vocal talents, Eduard Khil’s fame collapsed along with the country.

Many have gathered around to belt the limited variety of lyrics to Mr. Trololo ever since the song’s YouTube blast in 2009. The song has even been used as part of Jimmy Kimmel’s comedic set on ABC’s Jimmy Kimmel Live!

Russian Prime Minister Dmitry Medvedev honored Eduard Khil’s memory, saying he was “truly a people’s artist. Several generations of people loved his songs not only in this country but also abroad.”

The YouTube clip has been called “the high-speed freeway chase of music videos.” “Mr. Trololo” has racked up 12.5 million views since its release in 2009 and has inspired many covers on YouTube as well.

A funeral is to be held in Eduard Khil’s honor in a Moscow theater, and the YouTube sensation will be buried in Smolenskoye Cemetery in St. Petersburg.

While his recognition arrived late, Eduard Khil will be honored with coffee mugs donning his face, and a reference to his legacy on friends’ Facebook photos.