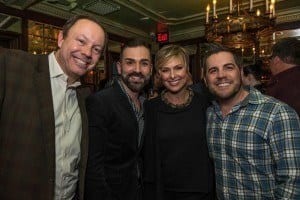 When Amazon’s “Transparent” won the Golden Globe for Best Series Musical or Comedy in January, the LGBT community kicked off a fruitful awards season that culminated in Sunday’s Gay and Lesbian Entertainment Critics Association (GALECA) Winners Toast. With the scope of great television and films that vie for mainstream awards growing each year, niche awards like the GALECA Dorian Awards give the industry a chance to reward some of the best entertainment that missed the televised red carpets.

Over 120 entertainment journalists across the US are members of GALECA, a group founded in 2008 by US Weekly television critic John Griffiths. The group aims to both promote entertainment journalism and remind audiences that the LGBTQ community has played an important role in the history of enhancing culture at large.

Taking place at Hollywood’s The Pikey Café and Bar, attendees included representatives from the winning films and shows like Melora Hardin from “Transparent” and Robert Michael Morris from “The Comeback” as well as ABC Studios executive Patrick Moran, author Anna David, and actor and LGBT-rights activist Wilson Cruz. Hardin was on hand to collect the five Dorians awarded to “Transparent” including TV Comedy of the Year and LGBTQ TV Show of the Year. Blair Late of “Newlyweds: The First Year” fame on Bravo served as the evening’s emcee.

Also in attendance were Jeff Zarrillo and Paul Katami, one of the two couples that brought their fight against California’s Proposition 8 all the way to the Supreme Court. Their legal crusade was documented in HBO’s documentary “The Case Against 8” which won filmmakers Ben Cotner and Ryan White the Dorian for GALECA’s Documentary of the Year.

Although his presence was only felt in a crowd-pleasing video message, George Takei was honored at the Winners Toast as the recipient of the Timeless Star award, GALECA’s award for lifetime career achievement.

The Dorians are named in honor of Oscar Wilde with a nod to his novel “The Picture of Dorian Gray.” The response to LGBT media has certainly come a long way since Wilde was imprisoned for his sexuality with shows like “Orange is the New Black” and “Transparent” winning not only Dorians but also Golden Globes and Emmys. For a full list of Dorian nominees and winners, visit GALECA.org.