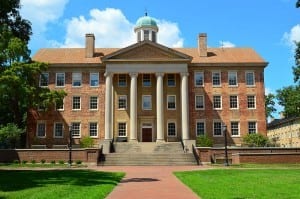 Durham, N.C. – Craig Stephen Hicks, the 46-year-old man charged with killing three Muslim college students is facing the death penalty after prosecutors in the case told a judge that they had incriminating evidence, which includes a pair of bloody pants, worn by the accused killer. Also included in the evidence, a .357 caliber handgun belonging to Hicks, matching shell casings to the handgun from the victims’ apartment, and a gunshot residue test performed on the accused, which came back positive.

Senior Resident Superior Court Judge, Orlando Hudson Jr., ruled that Hicks is “death penalty qualified,” after a brief hearing on Monday. Hicks showed no signs of emotion during the court proceedings, sitting handcuffed, as the judge announced his decision.

Craig Hicks is charged with first degree murder in the murders of 23-year-old Deah Shaddy Barakat, his wife, 21-year-old Yusor Mohammad Abu-Salha, and her sister, 19-year-old Razan Mohammad Abu-Salha on February 10th, 2015. The murders have been purported to be over a long-time dispute over parking spaces at the condominium the victims and the accused lived in. The condominium is located near the University of North Carolina at Chapel Hill, where Barakat attended as a dental student.

Durham County Assistant District Attorney Jim Dornfried said that there were “Certain issues he described involving parking,” and when he went to the apartment of the victims and knocked on the door, “the door was answered by Deah Barakat, there was a brief interaction, at which time the defendant pulled out his concealed firearm.” Hicks then shot Barakat multiple times, entered the apartment, shot the women each in the head, and left, but not before shooting Barakat once more.

Joe Cheshire, the attorney who is representing the family of the victims said that the family is “sad and confused,” because you cannot find once person who “would say something bad about those three young people.”