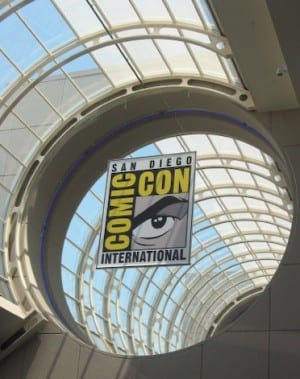 Three stuntmen working at Comic-Con became real-life heroes over the weekend when they rescued a woman from committing suicide. As thousands of fans milled around at Comic-Con in San Diego, three professional stuntmen were setting up for an outdoor “Kick-Ass 2” promotional event when people noticed a woman standing on the ledge of a balcony at an apartment building across the street.

At first, many onlookers assumed that the woman was part of the “Kick-Ass 2” promo, but soon realized the horrific situation was real and that the woman intended to jump.  The unnamed woman, who was drunk and upset over a recent breakup, climbed over the railing of her 14-story apartment balcony while horrified onlookers called out from below, trying to convince her not to kill herself.  The three stuntmen knew that police and firefighters would not be able to respond quickly enough and they sprung into action to save the day.

Receiving permission to enter the building, the stuntmen found the woman’s apartment unit unlocked and snuck in so as not to startle her while she precariously hung out over the Comic-Con crowd with one hand and one foot off the ledge.

Stuntman Amos Carver told reporters, “We’re trained to deal with these situations should they arise, but usually if we do, and it’s not an innocent civilian. If we’re saving somebody, it’s a situation we constructed in such a way that they’re out on the edge of life or death intentionally to get a certain shot and we swoop in. But those are people that are expecting this.”

Another stuntman, Gregg Sargeant noted, “She was ready to go.” As the stuntmen made it out onto the balcony, Sargeant wrapped his arms around her as the other two stuntmen secured her in a harness. As the girl was pulled to safety, she burst into tears and apologized profusely. The police and firefighters arrived moments later and thanked the three stuntmen, whom they dubbed “heroes.”

As for the three stuntmen, they were just happy to help. “I was just so thankful we got there when we got there. I think if we’d been there two seconds later, she would’ve been gone,” Sargeant said.