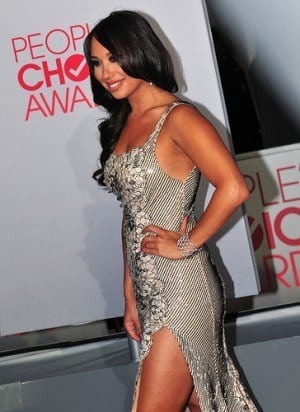 Cheryl Burke shows interest in becoming the next Bachelorette

Cheryl Burke, longtime cast member of Dancing with the Stars, has been rumored to be the next Bachelorette for the hit ABC reality series. Various sources are speaking out about the reports that Burke will be moving from the dance floor to handing out roses on group dates.

One source claims that producers of The Bachelorette and Cheryl Burke have been talking regarding her potential involvement with the show. A source told Radar Online, “She has a huge fan base, she’s great on television and they definitely think people would want to watch her find true love on TV.”

Another source claimed “ABC has asked her for years to do the show, she is holding out for a big payday because she knows she would bring a lot to the show.”

However, others are saying quite the opposite of the Dancing with the Stars beauty. One source said that Cheryl Burke being on The Bachelorette is “Never gonna happen! Never!” It’s also been reported that Burke has been the one begging to be on the show, not the other way around.

A second source said something similar saying, “The Bachelorette producers don’t like the idea of taking someone from another show because they want all their bachelors and bachelorettes to be ‘real people’.”

Rumors have also been spreading about a possible re-appearance by past Bachelorette star, Emily Maynard. Due to her recent split with fiancé Jef Holm, it seems Emily Maynard is back on the market. One source stated “Emily’s ratings were huge and the producers know that she is incredibly popular so they are talking with her about coming back for another try.”

Nothing is set in stone about who next season’s Bachelorette will be, only rumors. Stay tuned to see who will be the next lucky lady to try their hand at love.