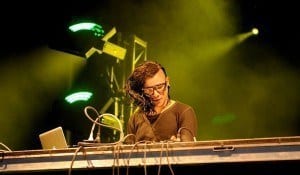 This year’s Bonnaroo brought a mix of both old and new – and everything in between.

Other not-old-but-not-new artists, such as Phish and the Red Hot Chili Peppers (who are all over the music scene this summer), also performed at the music festival.

Although three days of non-stop jamming may seem like a tiring experience, fans at this year’s Bonnaroo continued to rage on with a never-ending enthusiasm, even when performances went well into the night.

Radiohead was one of these performances, playing a rather long set that topped in at two hours and 15 minutes. Still, fans didn’t mind and stayed past midnight to hear the British rock band play on.

That was nothing compared to Skrillex’s 1:30 a.m. Sunday performance, which kept fans buzzing well into the night, only to end on the dubstep artist’s hit “Bangarang” right as rain hit.

Artists like Mac Miller, The Black Lips and The Joy Formidable kept the energy high on the last day of Bonnaroo.

Other artists like The Beach Boys, Bon Iver and Phish kept the mood relaxing.

Of course, the music festival wasn’t without surprises.

R&B singer D’Angelo brought an unexpected performance to Bonnaroo this year. D’Angelo had avoided performing in the U.S. for the past 12 years until this weekend’s Bonnaroo.

The crowd capacity for Bonnaroo this year was 80,000 people.