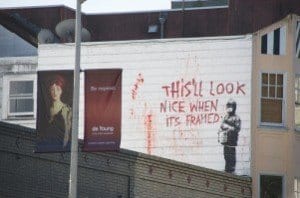 Banksy has been causing a stir in the Big Apple since he touched down in the city a couple of weeks ago. No one has ever seen the mysterious British street artist, but the faceless man has created a fascination similar to a superhero, with new works magically appearing around the city everyday. Where Superman hides himself behind a cape, Banksy hides behind his art but walks among us.

Banksy’s latest endeavor has left many New Yorkers feeling regretful and disappointed. If you were in New York and happened to pass an elderly man surrounded by black and white art pieces with a sign labeled “Spray Art” on it, then you literally just passed up an opportunity of a lifetime.

A video appeared on Banksy’s website with the caption “Yesterday I set up a stall in the park selling 100% authentic original signed Banksy canvases. For 60$ each.” Art collectors everywhere probably immediately felt a little sick at this knowledge. Banksy’s works have been known to sell in the six figure range, with one of his pieces Bird With A Grenade, selling at a cool $228,043.

The man selling the art in the park sat there as unknowing people passed the Banksy originals without even a side glance. The first sale was made two hours later to a woman who talked the price down to getting two art pieces for $60. Later, a woman from New Zealand purchased two at the price of $60 each and a Chicago man bought four of them for some simple decoration of his new place.

Anyone thinking that they are going to get in on this deal will sadly disappointed, since a note underneath the video on the Banksy website said “Please note: This was a one off. The stall will not be there today.”

In an interview done via email with the Village Voice, Banksy explained what he wanted to accomplish during his residency in New York. “I know street art can feel increasingly like the marketing wing of an art career, so I wanted to make some art without the price tag attached.” The guerilla artist added “There is no gallery show or book or film. It’s pointless which hopefully means something.”

There is no telling if we’ll ever to get to see the face of this talented artist. Earlier this year Banksy’s documentary “Exit Through the Gift Shop” was nominated for an Oscar and the artist only agreed to show up if he was able to wear a disguise. The Academy Award declined which prompted him not to make his much anticipated debut.

Banksy will be swooping New York for a month, so there is no telling what other tricks the artist has up his sleeve.