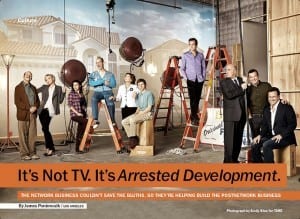 Arrested Development returned for its fourth season on Sunday morning, ending more than a year of anticipation and speculation. The original three seasons gain critical acclaim and a huge cult following. Now that fans and critics have had a few days to digest the new season, has it lived up to expectations?

It’s been seven years since the Bluth family has graced entertainment with the antics of their dysfunctional family. Arrested Development originally aired on Fox from 2003 to 2006. Creator Mitchell Hurwitz says that he was happy with where the show ended in 2006, even if fans weren’t.

“In truth, I had taken it as far as I felt I could as a series,” he said. “I told the story I wanted to tell, and we were getting to a point where I think a lot of the actors were ready to move on. My instinct was that it was over when Fox pulled the plug. I considered continuing the show because I felt I owed that to the fans. But I am determined to give them some other kind of entertainment that will satisfy them at some point, I hope.”

But with a seven-year hiatus, cast members who have moved on, and the new platform of going straight to Netflix, Arrested Development has had to change.

The biggest problem critics have with the new season is pacing. Season four episodes are longer since they lack the structure of a television time slot. So scenes are drawn out and the word play comes slower. But that’s not the only issue with Arrested Development that critics have found.

Due to problems getting the cast back together, each new Arrested Development episode is centered on a different member of the Bluth family. It’s an interesting change, since the first three seasons focused on Michael Bluth (Jason Bateman). This story-telling style allows for deeper character development of all the characters. But it doesn’t come without problems.

The whole fourth season of Arrested Development takes place over the same time frame. Each episode gives new information while still hiding important details that will be revealed later. It’s a daring Rashomon-style format that could have gone horribly awry.

Some fans and critics believe it has.

Wall Street Journal: ” ‘Arrested Development’ has lost a step or two in its long stint on the sidelines. The pacing is notably slower than during its original run and the show lacks the breathtaking density that characterized its glorious past. At its worst, the new/old ‘Arrested Development’ is reduced to doing a shaky imitation of itself: the characters and themes are there but the beats are slightly off, as is the tone.”

@virtualmatrix (on Twitter): “I cannot believe how boring arrested development is now. I kind wish it stayed dead. Sad, so sad. I hope other people are enjoying it.”

Of course there are those who love the new episodes.

San Francisco Chronicle: “Do the new episodes live up to those of the first three seasons which ended in 2006? Yes, and then some: The new season is not only as smart and absurdly funny as ever, but also reflects the rapid changes in how we watch television.”

I personally, after having watched six or seven episodes, have a very luke-warm opinion of the new season. There are moments where it’s reminiscent of the old Arrested Development, but they are few and far between. I was gratified to see past bit characters come back, like Kitty Sanchez and Carl Weathers. But with the family being separated, the show has lost the family dysfunction that made Arrested Development so great.

What do you think of the new Arrested Development?