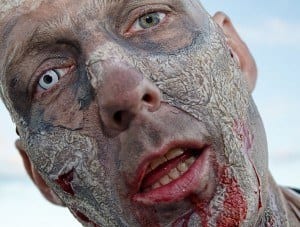 “Zombie apocalypse” seems to be the phrase on everyone’s lips these days, and the fuel behind this zombie-talk fire only continues to grow on the Internet.

Facebook feeds, Twitter tickers and blogs everywhere can’t seem to stop discussing the possibility of a zombie apocalypse after a Florida man, under the influence of the street drug “bath salts,” ruthlessly gnawed at a man’s face until almost nothing was left. He continued to eat the man’s face even in the presence of police.

The recent emergence of the story involving a Maryland man accused of eating the heart and brains of another man also added to the zombie discussion.

This less-than-human behavior has some people feeling that zombies are not just stories for books, movies and television shows- but an actual reality.

People have even become so transfixed by the idea of a zombie apocalypse that some believe it could be an actual possibility and have been taking the Center for Disease Control’s February-issued guidelines and recommendations for a “zombie apocalypse” too literally.

Twitter users had especially been taken by the CDC’s guidelines, posting about them in their tweets to inform others on how to take preventative measures against “zombies.”
This caused the CDC to issue a statement that their guide to a zombie apocalypse was, in fact, done in jest and was actually intended to raise attention to natural disaster preparation.

Twitter users have also been incorporating cultural references to movies and shows like Shaun of the Dead, 28 Days Later and The Walking Dead into their tweets as they suggest zombies could really be among us.

As the seeming capstone of pop culture, memes have even been created in response to the zombie craze.

Phrases like, “I’m not saying it’s the start of the zombie apocalypse, but when a dude bites off another dude’s face and doesn’t react to being shot, perhaps we should consider it” and play on the Carly Rae Jepsen Call Me Maybe lyrics, “I just met you, and this is crazy, but here’s my bath salts, your face is tasty” have been attached to zombie apocalypse-related memes.