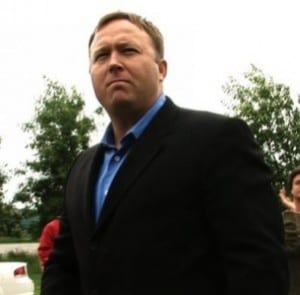 Alex Jones, radio host of “The Alex Jones Show” and pro-gun activist, appeared on Piers Morgan to debate the TV personality over the issue of gun control, but Jones quickly morphed into a mile-a-minute conspiracy theorist mouthpiece, barely letting Morgan say anything at all. Alex Jones was invited to come on to Piers Morgan’s show after he spearheaded a petition to deport Piers Morgan for supporting stricter gun control laws following the elementary school massacre in Connecticut.

Piers Morgan started off normally enough, asking the radio host, “Why do you want to deport me?” In addition to not answering the question directly, Jones embarked on a rage-filled tirade that managed to include references to Hitler, Stalin, a recent gang rape in India, a new world order, and perhaps his most bizarre talking point: “I’m here to tell you — 1776 will commence again if you try to take our firearms!”

Between rapidly switching topics without giving Morgan a chance to react, Jones spat out a number of conspiracy theories, somehow managing to include that the Bush Administration was behind the attacks of September 11, 2001. Eventually, he resigned to mocking Piers Morgan’s British accent, having successfully answered none of the questions presented to him.