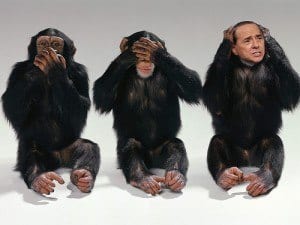 “Stay away from underage prostitutes, y’all. Trust me.”

And in the corrupt politicians, underage prostitution and general Italian-y news, Silvio Berlusconi was sentenced to seven years in prison this morning. After the traditional mandatory 120 minute cigarette and cappuccino siesta, a Milan court found the former Italian Prime Minister guilty of paying for sex with an underage prostitute and abusing his power to cover it up.

“Silvio Berlusconi and The Case of the Underage Prostitute” has been playing on the news media since January 2011, when a criminal investigation into the misdeeds of the then 74-year-old playboy politico began.

At the center of this political sexual thriller is Moroccan Karima El Mahroug, the alleged prostitute who goes by the stage name of Ruby Rubacuori (Italian for “Ruby Heartstealer”). So naturally, the collective imagination of the news media has dubbed the entire scandal “Rubygate.” Dammit news media. You’re letting Nixon win, bad news media!

Silvio Berlusconi could’ve avoided prison time for this particular incident if only he wasn’t so damned lazy. You see, in the far more progressive land of Italy, prostitution is legal (but no pimping!) In addition, it is entirely lawful (and certainly respectable) for an adult to engage in sexual intercourse with a person ages 14-17. The thing that is illegal? Paying for sex with a person under 18.

Silvio Berlusconi could’ve picked A) Prostitution or B) Sex with a minor, but like many of us he didn’t study before the test and decided to go with C) All of the above. Lazy Silvio Berlusconi; very lazy.

So that’s where the underage prostitution charge comes into play for Silvio Berlusconi, now let’s touch on the abuse of power. Karima El Mahroug AKA Ruby Heartstealer AKA Really? was arrested in Milan in May 2010 for stealing 300,000 euros (nearly $400,000.)

I don’t know what Italian prisons are like for former Prime Ministers, but I’m sure they will have their own variation on “bunga bunga” parties.