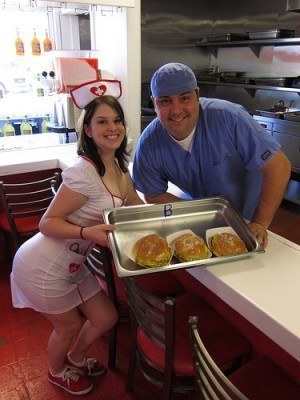 The Heart Attack Grill encourages people over 380 lbs to eat there. After all, they eat free. Though this is the second location opened, people are still concerned with the restaurant’s image.

For a restaurant centered around fatty foods — such as Single Bypass (one patty with cheese and toppings) and “flat-liner” fries cooked in pure lard — it resembles a hospital on the outside. Inside the customers are considered patients, the waitresses are nurses and food orders are called prescriptions. The restaurant also offers beer, soda, candy and no- filter cigarettes.

While, the restaurant warns of the side effects of eating their food, people wonder about the moral concerns of having an establishment open of this nature.

The first restaurant, near Phoenix, that opened caused a great deal of criticism and even gained the attention of Arizona’s attorney general. The owner Jon Basso was eventually arrested after hosing a group of heath care protestors.

Basso says about his restaurant, “If people pondered what I’m doing, they’d realize I’m creating a mockery of this. When you hop on that scale and you’re 350 pounds and we give you a free burger and people cheer, what’s really going on? We’re singling you out as a freak. On the one hand, I could try to defend myself ethically and call myself a crusader that’s trying to wake up America and conduct an intervention on obesity. That’s half true. The other half is I’m an entrepreneur trying to make a buck, plain and simple.”