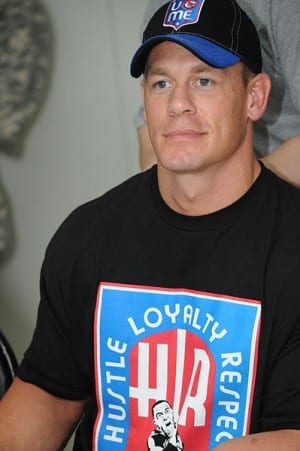 What do WWE star John Cena and Scooby Doo have in common? Well, nothing. But according to a press release at WWE.com on Tuesday, August 14th, John Cena will pair up with fellow wrestlers to contribute their voices to a Warner Bros. animated full-length movie in which Scooby Doo and the gang team up to solve a mystery at WrestleMania.

Many are praising this business move by WWE saying it will be great for the marketability of the company. John Cena joining forces with Scooby Doo will produce a large appeal to kids and contribute to the PG reputation WWE currently holds.

As of late, WWE is not doing as well as they would have liked as far as their ratings go. With Scooby Doo, they hope to change that. Children are a large part of keeping this company viable in the future and this animated film will help to pull in the younger generation and get them hooked early.

The film may even appeal to older fans because of the ways in which Scooby Doo is able to transcend age. It has been and still continues to be a very well-known cartoon and can still be enjoyable even to an older audience.  If you’re 30 years old and still hooked on Scooby Doo, well that’s okay.

Some of the more popular characters from Scooby Doo such as the Harlem Globetrotters and Batman promise to make an appearance as well.

It has not yet been decided if the film will have a theatrical release. However, it is scheduled to be available on DVD, Blue-ray, VOD and digital download by 2014.