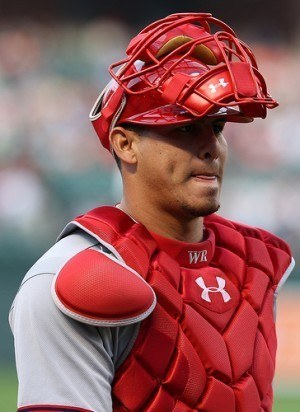 Wilson Ramos is the catcher for the Washington Nationals

Wilson Ramos has been kidnapped while in Venezuela.

The Washington Post reports that Ramos was kidnapped at gunpoint on Wednesday from his family’s home. Ramos, 24, returned to Venezuela for the winter and had planned on playing with the Aragua Tigers.

“It’s true, Wilson Ramos was kidnapped 40 minutes ago,” Katherine Vilera, spokeswoman for the Tigers, said Wednesday evening. “The CICPC are up on this and were going to his house in Santa Ines,” she said. “They took him from his house.”

“I don’t know what’s going to happen now,” said Enrique Brito, a longtime official in the Venezuelan winter baseball league and a close friend of the Ramos family. “It’s going to be bad for the culture, for the league, for everything. Wilson is one of the best players that we had. It’s bad. It’s real bad, for all Venezuelan people and fans. We are all shocked.”

Ramos is one of the Nationals’ best players. In recent years, Venezuela has been ravaged by kidnappings and street crime.