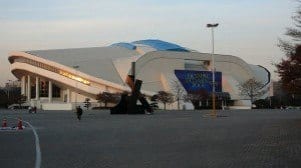 The 15-year-old swimmer, Katie Ledecky, is headed to the London Olympics after winning the 800-meter freestyle, earning her a spot on Team USA.

According to The Associated Press, Ledecky completed the race in just over eight minutes. Katie Ledecky beat Janet Evans’s record for her age group in the 400-meter by 45 seconds. Evans won three gold medals at 16 in the 1988 Seoul Games.

Katie Ledecky said, “Four years ago I never knew how to qualify for Olympic trials. I thought it was this unreal thing.”

The 23-year-old Olympics veteran, Kate Ziegler, finished second-place with 2.09 seconds over Ledecky’s 800-meter time. Katie Ledecky looks up to Zeigler. Zeigler said, “The experience that she’s got ahead of her is so exciting and I’m excited for her because I’ve been there and it’s the coolest.”

Ledecky maintained first place throughout the race, never falling behind or having to catch up again. The 15-year-old said, “I was really surprised with how fast I went out [Sunday],” she said. “I wasn’t really expecting it, but I just went with it and kept going.”

Katie Ledecky is the youngest new member of Team USA.