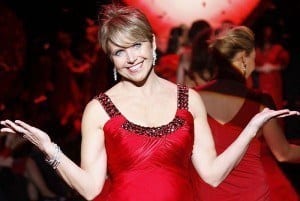 Couric opens up on talk show while interviewing Demi Lovato

Katie Couric will graciously open up about her battle with bulimia during her talk show’s interview with Demi Lovato Sept. 24. Recent X Factor judge Lovato has been in the media for her own battle with eating disorders.

According to an exclusive ABC News report, Katie Couric struggled with bulimia from her late teens into her early 20’s. “I wrestled with bulimia all through college, and for two years after that,” says Couric, according to a transcript of today’s Katie show.

It is through Demi Lovato’s interview that Katie Couric was able to finally open up about her bulimia.

“I know this rigidity, this feeling that if you eat one thing that’s wrong, you’re full of self-loathing and then you punish yourself, whether it’s one cookie or a stick of gum that isn’t sugarless, that I would sometimes beat myself up for that,” Couric explains of her bulimia battle.

Bulimia, properly known as bulimia nervosa, is an eating disorder characterized by binging and purging. Binging consists of consuming large amounts of foods in one sitting, and purging is the act of getting rid of the calories consumed through means such as vomiting, excessive exercise or laxative use.

After much time, Katie Couric beat bulimia with the help of a therapist. Couric also researched the effects of purging on the body, which can cause lasting medical damage such as dehydration, heart failure, tooth decay and digestive problems, according to the Mayo Clinic.

The Sept. 24 episode of Katie is a part of the Katie Couric show’s “A New Beginning” theme. Demi Lovato was chosen because she is a woman making a significant transition in her life.