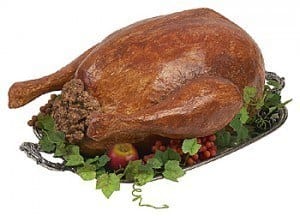 Stores that used to close to observe the Thanksgiving holiday are now opening their doors to offer deep discounts, observes the Washington Post.  Will the holiday eventually be overrun by the need to buy those Christmas gifts?

When Doug Matthews,  a 49-year-old chef from New Jersey, made a blog post about his frustration with Christmas and shopping overshadowing Thanksgiving, he didn’t know it would spark the “Respect the Bird” campaign on facebook.  The group now has 2,500 people pledging to not let this year’s Black Friday “gobble up” their Thanksgiving.

Some subscribe to the same adage with a different agenda in mind.  The group credited with sparking the Occupy movement, Canadian anti-consumerist magazine Adbusters, isn’t new to the idea of a Black Friday protest.  For years, they’ve promoted “Buy Nothing Day”, an effort to not purchase anything on the biggest shopping day of the year.  And with the Occupy movement growing larger by the day, some occupiers have informally announced that they will protest shopping malls and corporate stores.  Their goal is to “bring the economy to a halt on the one day they won’t be able to ignore” them.

While Black Friday and Cyber Monday showcase deals too good to pass up, many are resisting, refusing to let consumerism take away their holiday.  How will you choose to spend your Thanksgiving?

Read more about the “Respect the Bird” campaign and Black Friday protests here.