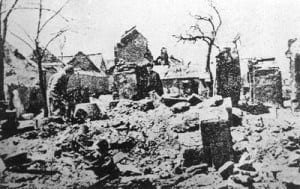 Concerns arise that more than just airplane passengers are affected

An old American airplane crashed in Nigeria Sunday, killing all 153 passengers on board. The Nigeria plane crash Sunday marked the most fatal air crisis in over 20 years. There is concern that people on ground may have suffered from the crash as well.

The Dana Airlines flight was traveling from Abuja to Lagos, and it crashed into a building, setting surrounding buildings on fire. The plane collided into a studio, a printing press and at least two apartment buildings before stopping.

According to Harold Demuren, the director general of the Nigerian Aviation Authority, rescue workers searched for the airplane’s flight data after the Nigeria plane crash.

The data shows that before the Nigeria plane crash, the same aircraft suffered two separate, minor incidents while in the Seattle-based airline service, Federal Aviation Administration and the Aviation Safety Network.

On both Nov. 2, 2002 and Aug. 20, 2006, smoke and an electrical smell in the cabin caused the pilots to make emergency landings. And on April 19, 2010, loss of engine power by collision with a bird led to another emergency landing, according to the Aviation Safety Network.

Only buckets of water brought to the site were available to tame the fire.

Nigerian government has a reputation for ineptness, according to TheStar online, and the country is prone to airplane crashes and disasters. A Lagos-owned airline crashed into a bus killing 10 people Saturday night.

In September 1992, a military transport plane crash headed for Lagos crashed, and every passenger on board was killed.