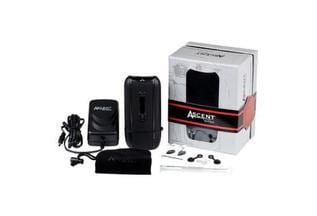 College News analyzed the functions of this multi-faceted vape

Let me just start off by saying that we reviewed the DaVinci Ascent vaporizer. Look, I’m going to be blunt, odds are you or someone you know smokes marijuana. If you live in Colorado or Washington, you probably know lots of people. Done responsibly, weed isn’t a terrible thing. Like anything though — not just drugs — smoking in excess can have undesirable effects and consequences. I used to smoke it daily, but life, family, and basic loss of interest means it’s not something I participate in any more. That said, I have many friends who still smoke pot. And not “friends,” with the air-quotes and a wink, but people who are occasional smokers and some or are plugged into the weed culture.

Those are the guys who introduced me to vaporizers.

Over the last couple of months I’ve been using the DaVinci Ascent, provided to me by the company, to find out why the sudden interest in vaporizers has skyrocketed. My personal experience still has me questioning vaporizing overall, but there’s two reasons for that. First, I’ve never been much of an herbal therapy type of person. Second, I didn’t use it with marijuana. That’s not to say it wasn’t tested with it — just not by me.

Before that though, it’s important to talk about how easy the DaVinci Ascent is to use. It comes with specialized canisters, so you can use it for oils in addition to the loose-leaf products. After loading your herb of preference or oil into the chamber, you can dial in your desired temperature. By pressing just a couple of buttons, your vaporizer is activated and the digital readout will tell you when it gets to the desired temperature. It comes with an instructional booklet, which I recommend you read prior to use.

The digital temperature gauge is important because different herbs are activated at different temps, including marijuana, so it’s important to do your research. Thyme, for instance, activates at 190 degrees and is said to give the user a light buzz and has certain gastric benefits, where St. John’s Wort, activated between 100-150 degrees, is a natural antidepressant and can help you sleep better.

It’s worth noting that St. John’s Wort can reduce the effectiveness of birth control. Aside from preventing unwanted pregnancies, other herbs can have side-effects. KNOW WHAT YOU’RE PUTTING INTO THE VAPORIZER, AND KNOW ALL THE EFFECTS BEFORE YOU TRY IT.

To recharge, you simply plug it into the included wall-charger. A USB-charger might be more universally useful, but the size of the battery and charge it needs to fill is more than a USB could handle. You’ll get a modest number of uses from the Ascent before it needs another charge, making it a great piece to carry with you on the go. It’s about the size of a cell phone, but far thicker. You can fit it in your pocket, but it’s probably best left in a bag. It comes with it’s own carrying bag, but it closes up so tightly that it’s not necessary if all you’re concerned with is spills.

Now the information you’ve been waiting for — let’s talk about vaporizing marijuana. A close personal friend of my family has been battling cancer and has a medical marijuana card, something not uncommon here in Maine. As a former cigarette smoker of 40 years, smoking marijuana in the forms he knows — rolling a joint or smoking from a pipe — can lead to some pretty intense coughing fits. He’s been smoking it for years, but his medical condition has allowed him to get it from a dispensary where the variety and quality is far better than, “calling that guy to see if he has any.”

When I initially approached him about using the DaVinci Ascent, he was hesitant. He’s been smoking for years and is happy with what it does for him. He leaned on, “If it ain’t broken, don’t fix it,” as his excuse to stick with what he knows. That stance didn’t last long.

After sitting with him and showing him how to load it (and charge it, set the temperature, etc.), we looked up the temperature needed to activate marijuana. Surprisingly, we got two results. Each of them caters to a certain community of users.

First, for those out there who don’t want to experience the high that comes along with marijuana, vaporize it at a lower temperature. This will activate the cannibidoil (CBD), allowing the user to get those benefits. Reduced nausea and vomiting and combating tumors/cancer cells are two of the known effects, as well as reducing depression and anxiety. If someone is battling cancer, but doesn’t like getting high, vaporize it somewhere around 150-170 degrees.

If you enjoy the high, you’ll want to dial in between 350-400 degrees, but this will vary for each individual. For my friend, we decided to set it at 380 degrees and the results were, to use another direct quote, “Wow, man. This is incredible.” That’s because at this temperature, the THC is activated, which is what results in the high.

The high, in this case, was stronger than he normally obtained, while he used only a fraction of the weed he would normally. That’s because the vaporizer activates more of the THC in the marijuana when compared to smoking it in the classic way. Less gets wasted and more goes into your body. That’s why you can use less but get a better high.

The most important aspect of this, at least for this particular person, was that there was no coughing. A slight smell of burnt popcorn filled the air, but you couldn’t smell the marijuana at all, he didn’t have a coughing fit for the first time in years, and his high was better than ever. To help, I let him keep the DaVinci Ascent and, weekly, I get a phone call explaining how much he loves it.

Unfortunately, DaVinci can’t market the device for use with marijuana, thanks to federal laws, but make no mistake, this vaporizer works wonderfully with it. There’s no ridiculous cloud of smoke when you exhale, which makes it very discreet if you want to carry it with you. Normally priced at $249.99, you can get it for $199.99 right now at the DaVinci website (http://www.davincivaporizer.com/ascent-vaporizer-by-davinci/). Whether you’re a habitual smoker or casual, there are immediate benefits and the device will pay for itself.