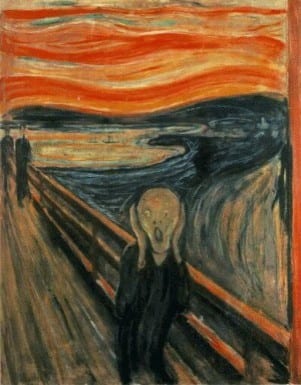 The Scream painting has fetched an extraordinary amount at auction Wednesday, a record $119 million.

The Scream painting is easily one of the most recognizable works of expressionism in the world. Its distorted figure and streaky blood-red sky are known the world over as a modern expression of human angst.

Edvard Munch’s 117-year-old work of art fetched a record $119,922,500 at Sotheby’s auction in New York City. No details we given regarding the identity of the buyer.

The 1895 piece exceeded pre-auction estimates by a wide margin, approximately $40 million, in fact.

The Norwegian artist, born in Oslo in 1863, stated of the experience that brought the painting to life: “I was walking along a path with two friends – the sun was setting – suddenly the sky turned blood red – I paused, feeling exhausted, and leaned on the fence – there was blood and tongues of fire above the blue-black fjord and the city – my friends walked on, and I stood there trembling with anxiety – and I sensed an infinite scream passing through nature.”

The inspiration for The Scream painting can be seen in Munch’s own experiences. The artist was surrounded with tragedy throughout his life, suffering the death of both his parents and beloved sister by the age of 25. He also witnessed his sister, Laura, committed to an asylum shortly afterwards.

The seller of the item, Norwegian businessman Petter Olsen, remarked that he thought “the moment has come to offer the rest of the world a chance to own and appreciate this remarkable work.” Olsen is the son of a former friend and patron of Munch.

The previous record for a work of art sold at auction belonged to Pablo Picasso’s, “Nude, Green Leaves, and Bust,” which sold for $106 million at Christie’s auction house in 2010.

Simon Shaw, a member of Sotheby’s Impressionist and Modern Art Department, stated of the renowned Munch painting: “If ever there was a work of art of true shock-and-awe, it was Edvard Munch’s ‘The Scream.’”