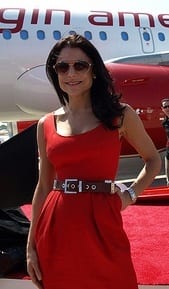 Bethenny Frankel revealed to the Today show Monday morning that she suffered a miscarriage after the birth of her daughter Bryn.

“We were pregnant with a second baby and at eight weeks I miscarried,” the 41 year-old mother said.

Bethenny Frankel and husband Jason Hoppy have been married for two years, and their daughter Bryn is now 21 months old.

Bethenny said she was pained by the loss of her child, but she was also empathetic for women who could not have children at all.

“Thinking about women who can’t even have their first baby.… I’m really lucky. I have the most beautiful daughter in the world and I’m grateful for her…. The window’s closing and it’s something I’m dealing with,” Bethenny said.

Bethenny Frankel is the star of Bravo’s reality show Bethenny Ever After, which premiered its third season Monday night. The miscarriage did not happen during the taping of the show.

The new season kicked off with a party for the first new cocktail since the sale of Skinnygirl. Meanwhile, Bethenny Frankel and Jason Hoppy continued to struggle with their differing opinions of being in the public eye and managing their marriage, all the while taking care of Bryn and purchasing a new apartment. The renovations of which will likely be a catalyst for the season.

Bethenny Frankel fans can look forward to drama and change for the original Skinnygirl this season. A girls’ trip to Montauk, a beach party for Skinnygirl cocktails, and a couple’s workshop on the open sea are just a few of the adventures we can expect, each with their share of hilarious one-liners and Bethenny-isms that fans have become familiar with.
If another season of Bethenny Ever After is not enough for her fans, Bethenny Frankel announced Monday night that she is looking forward to beginning a daytime talk show that will premiere on Fox TV stations on Monday, June 11.

“It’s a girlfriends show, but it’s really honest,” she said, “Just what’s really going on, have an honest conversation without it being just me in the fishbowl. I want to involve everyone in the conversation.”

Bethenny Frankel was part of the original cast of The Real Housweives of New York City, and is the creator of the Skinnygirl product line. She is also an author and chef.