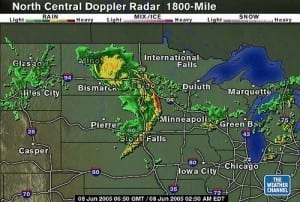 One in five Americans could be affected by huge storm

A huge thunderstorm on Wednesday is estimated to affect one in every five Americans. Reaching from the Midwest to the East coast, the strong winds will stretch across the U.S., reaching 64 million people in 10 states, and could produce a derecho.

A derecho is a storm that could span 240 miles with straight-line winds.

The main recipient of the major storm is seen to be Chicago, Indianapolis, Cincinnati and Columbus, Ohio, with a risk for severe weather 45 times higher than normal. But, along with those cities, Detroit, Baltimore, Washington, Milwaukee, Pittsburgh and Louisville, Ky., are also expected to be influenced by the storm with a risk level that is 15 times higher than normal as well.

While it is normal for the Midwest to see the formation of a derecho once a year, that still doesn’t diminish the widespread turmoil that the storm could produce. Meterologists are warning that the derecho could produce tornadoes, power outages and winds from 80 to 100 mph that could easily snap tree branches and bring down utility poles and wires.

Derechos are generally characterized by their backwards “C” shape that they make. How much of the curving shape that the storms make decides whether the impending storms remain severe thunderstorms, or become a derecho.

“It’s a pretty high threat. We don’t want to scare people, but we want them to be aware,” Bunting said.

Along with that warning, Jeff Masters, meteorology director at Weather Underground, agrees that Wednesday could be very dangerous.

These storms “might be the worst severe weather outbreak for this part of the country for the year,” Masters said.

The best thing that we can do now is watch the sky and know when it’s time to get inside. Bunting recommends keeping a close eye on the sky because this storm moves quickly. If we aren’t aware and happen to be outside at the wrong time, we could be caught in a dangerous situation.

“By the time you see the dark sky and distant thunder you may have only minutes to get to safe shelter,” Bunting said.

So if you have plans Wednesday or Wednesday night, just pay special attention to the weather to make sure nothing bad happens to you.

Along with that, be aware of lightning. If you can hear thunder, then that means you are close enough to lightning that you could be hit.

According to the weather service, the worst of the storms is expected to hit in the afternoon for the Midwest, but for Washington, Philadelphia and parts of the East Coast the threat continues on to Thursday.