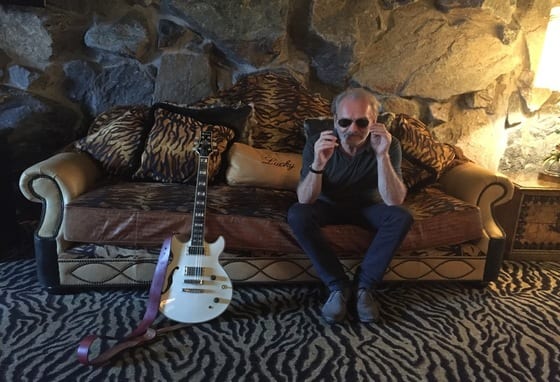 Jack Hues and the Quartet are a captivating collaboration of music and art. Their album “A Thesis on the Ballard” applies jazz resources to the traditions of English folk. Jack Hues discusses the literary content of music and how text influences his songwriting.

“Using poetry, orchestra and maybe jazz resources to create these sort of hybrid pieces, is the territory that I’d like to move into.”

Hues spoke to College News about the various genres in the industry that have influenced his music and the cohesive nature of his quartet. With the new release of his album “A Thesis on the Ballard” Jack Hues takes us on a celebration of art and expression, capturing the essence of creativity and sophistication in songwriting. Hues and his delightful quartet are sure to be a next favorite on your playlist.

College News: How was the show at the Borderline in London last night?

Jack Hues: It went great actually. It was a small but select audience, but I would expect that for this project. It was fairly obscure and athematic. Really, I just wanted to have an opportunity for the band to play. Because it’s a sort of “jazz” project, which really means improvisation, it’s difficult to rehearse. If you know what I mean? So playing in front of an audience is the way to do it, and they loved it. So we had a great time!

CN: Your album “A Thesis of a Ballard” is a celebration of art and you wrote this collection of six songs to poems by Kelvin Corekoran. What drew you to this project?

JH: Yes, he was there reading the poems in person! He delivered a talk about them, how he wrote them and then we played them. It may sound a little overly serious, but in a sense, it gives a great context to a song. With my work in Wang Chung, I’d usually write my own lyrics. There are only a couple of examples where I worked with other people. In fact, all of the examples actually never saw the light of day. But on our last album “Tazer Up”, we did a cover of a song. I found that working with someone else’s text is a very interesting exercise for a song writer like me.

CN: “A Thesis of the Ballad” is listed as collaborations volume three on the album.  Volume one is with two other poets, Simon Smith and David Herd while volume two is with the Canterbury rock band Syd Arthur, who are on the brink of releasing their second album with Universal.

JH: Yea, that is a great privilege to hear isn’t it? Magill who is the bass player of Syd Arthur, was doing the sound for us at The Borderline last night. He is a good friend, a great sound engineer and bass player. Joel and Magill gave me a copy of their CD, which isn’t released yet I don’t think, but it’s great. There is one track that I think you are going to be hearing on the radio quite a lot.

CN: Not only does “A Thesis on the Ballard” feature great music and poetry but also the works of Anna Fewster, a well-known artist from the UK who designed the album art with letterpress.  How did you become to work with her?

JH: Shes actually the wife of a friend of mine. For a while, I taught songwriting at a university here in Canterbury. There is a guy there named Robert Stillman, an American – one of your compatriots, a lovely guy and a really great musician. His wife Anna does a special sort of screen printing. So I asked her if she would be interested in creating an illustration. The album “A Thesis on a Ballard” on vinyl has a 12-inch format, which I think is really a nice size for that illustration with the booklet, and with Kelvins poetry, the whole thing is a really nice package I think.

CN: Is this your latest album since “Tazer Up”?

JH: Yes, it is! “A Thesis on the Ballard” would be the most recent thing I have done. Before that was “Tazer Up” the Wang Chung album in 2012.

CN: And before “Tazer Up” you had “Illuminated” that was recorded in 2007, then “Shattering” in 2008. Those were also recorded with Jack Hues and the Quartet?

JH: That’s right! They were recorded with Jack Hues and the Quartet. At that time the quartet had a different line up. I suppose the nature of jazz is that you tend to be working with different musicians. The chemistry of bands is much looser and you work with differnt people. With rock bands, the personalities tend to evolve, so the chemistry there is very important. In jazz, it’s more like going for more of the — “Top Guns” as it were. So on these first couple of albums, I was working with this amazing saxophone player named Paul Booth, and he contributed a whole lot to that. But what I was trying to do I suppose artistically with the current Jack Hues and the Quartet, was to create a sort of hybrid where Iam working with experienced and really talented young jazz players. But the spirit of the project is that we are band rather than just a bunch of individuals getting together and jamming. Again, the purpose of doing these gigs was to start generating that feeling of the band as a unit in the sense that I knew it in rock music, and I think there is a lot to be said to that.

CN: I think one striking thing that I noticed right away is the essence that you are creating with Jack Hues and the Quartet and how jazz had traditionally worked with poetry and other aspect of art and how you are collaborating with other artists. Is that an intentional feature of this project?

JH: It is, yes. I think with Wang Chung, seeing that as my career as a rock musician; it can be quite insular. It’s sort of like they are what they are. When you bring in outside influences, they only float in the peripheral. It’s quite hard to do collaborative work. Though I guess we did that when we did some of the movie scores. My quest as a songwriter is to try and sort of expand the territory that I have covered. My interests in music is very wide. I listen to a lot of classical music which includes Mozart and that sort of thing. Then you have to more modern classical music. A piece that Iam really into at the moment is by a guy named Hans Abrahamson called “Let me Tell You”. It’s a really amazing piece! He is like an orchestra and soprano solo singer. Using poetry, orchestra and maybe jazz resources to create these sort of hybrid pieces, is the territory that I’d like to move into.

CN: In reviewing earlier interviews you had spoken about how one of your earliest influences was some of that early British punk from the 70’s and I was curious after hearing that if you were you a fan of the band Joy Division?

JH: You know what, I was never a fan of Joy Division. I subsequently got more into them. Coming into the music scene in England in the late 70’s, there were a bunch of bands like The Smiths that was led by this literary content about what they were doing. I’m sure they will forgive me for saying this, and Iam sure they don’t care, but they were sort of amateurish in their approach to the music, which was very much what punk was about. It was about non professionalism; it was about self-express and It was very inspiring to me having been through three years of music college at that time. It was sort of liberating to think outside that box that I was framing myself in. I was more interested in bands at that time but for me, I was more driven by the music. So let’s say a band like Siouxsie and the Banshees for example, is a band that had a big influence on me and all sorts of bands which sometimes I had the opportunity to work with at that time.

CN: What do you want you fans to know about your new project Jack Hues and the Quartet?

JH:  I’d encourage anyone and any Wang Chung fan to check it out! Iam not sure if you see any connection with the work I am doing with the quartet and the work with Wang Chung. For me, there is sort of a DNA that I have that imprints itself on everything that I do. Ive written songs since I was 12 years old, and I still think it’s a vital way of writing music. The six songs that form “A Thesis on the Ballard”, I think are sort of concentrated, distilled examples of where I’ve got to as a songwriter. I do think that it’s is successful. People are touched by the songs. I feel “A Thesis on the Ballard” deserves a wide audience and I’d invite anyone to listen to it with an open mind.